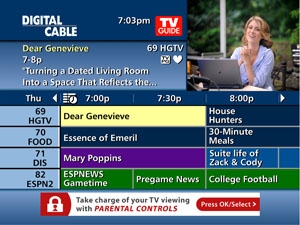 What: Shares of entertainment data technologist Rovi Corporation (NASDAQ: ROVI) jumped as much as 18.7% higher on Friday, following a strong fourth-quarter report. The stock price has now more than doubled since bouncing off a deep, dark bottom last October on the heels of a much less optimistic quarterly update.

So what: In that third-quarter report, Rovi's management set seemingly impossible guidance targets for the fourth quarter. In order to hit the midpoints of the official full-year guidance ranges, the company had to deliver adjusted earnings of at least $0.42 per share on sales of $138 million. That was a tall order in the light of declining long-term trends. Accordingly, analysts set their consensus estimates slightly below the guidance midpoints.

But Rovi delivered on its promises, and with flying colors.

In the fourth quarter, sales rose 11% year over year to $149.5 million. Adjusted earnings jumped 48% higher, landing at $0.65 per share. In both cases, Rovi left its own guidance and analyst estimates far behind.

Now what: After spinning its wheels for years, Rovi signed firm license agreements with consumer electronics giant Sony (NYSE:SONY) and telecom-plus-TV titan AT&T (NYSE:T) during the fourth quarter. Both of these deals sent Rovi shares soaring, and the company now aims to land similar agreements with DISH Network (NASDAQ:DISH) and Comcast (NASDAQ:CMCSA) in 2016.

Thanks to the AT&T deal, Rovi's service provider sales jumped 38% higher year over year. If DISH and Comcast follow suit, both of their contributions would fall in the same bucket as these AT&T invoices. Intellectual property licenses are turning out to be a serious growth driver for Rovi -- at long last.

Now, you may not see Rovi's license clients reporting their agreements with quite the same zeal. After all, AT&T's annual sales run close to $150 billion. Comcast and Sony hover near $70 billion each, and even the relatively modest $15 billion of annual sales that DISH reports makes Rovi's $500 million look forgettable. In short, whatever these companies are paying Rovi for the rights to use its patent-protected content management tools, it's a big deal for Rovi but a drop in the bucket for its customers.

If Rovi can deliver on its promises to sign Comcast and DISH fairly soon, you should see the stock soaring again on the news. This fourth-quarter report simply underscored just how game-changing these deals can be in the context of Rovi's otherwise modest operations.