You don't need to be rolling in cash to put your money to work.

You don't need thousands of dollars to reap the benefits of investing in the stock market. The cost of buying and selling stocks is lower than it's ever been, so even with just $500 to invest, you won't see a huge percentage of your hard-earned money eaten away by fees.

What can be overwhelming, though, is the number of options available. Thousands of stocks and exchange-traded funds can be bought and sold, and choosing the right ones can be an arduous task. Thankfully, a few of our Fool contributors have some suggestions.

Todd Campbell: If I were a young man again and I had an extra 500 bucks kicking around, I'd invest it equally into these three ETFs:

I'd do that for three reasons.

First, the technology, healthcare, and financials sectors should give me exposure to the big drivers of economic growth and as a result, these sectors, rather than say, consumer staples, could offer me a better chance at benefiting from the impact of sales and profit growth over time.

Those may not be knock-'em-out-of-the-park returns, but they're still solid.

Second, because these ETFs own dozens of stocks, investing in them spreads my risk around and reduces the chance that I pick the wrong stock at the wrong time.

Finally, ETFs' low costs can lead to returns that are higher than other investment choices over the coming decades.

The trick? Picking the right one.

With a small investment like $500 to make, I'd invest in the Vanguard Small-Cap Growth Stock ETF (VBK -1.04%), a very low-cost index fund that tracks the CRSP US Small Cap Growth Index. This index tracks 721 companies with an average market cap of $3.2 billion that meet particular growth criteria.

This ETF has outperformed the S&P 500 pretty soundly since it was launched: 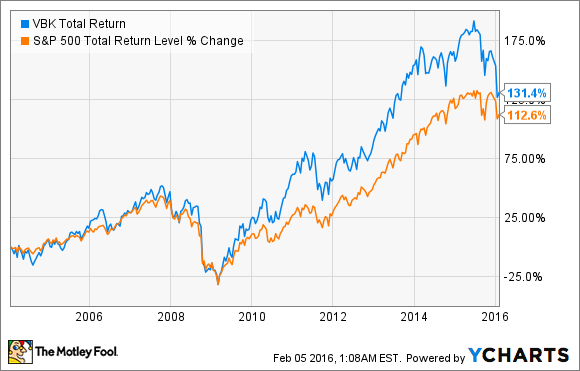 Here's how the mutual fund family that this ETF is in has performed since its inception: 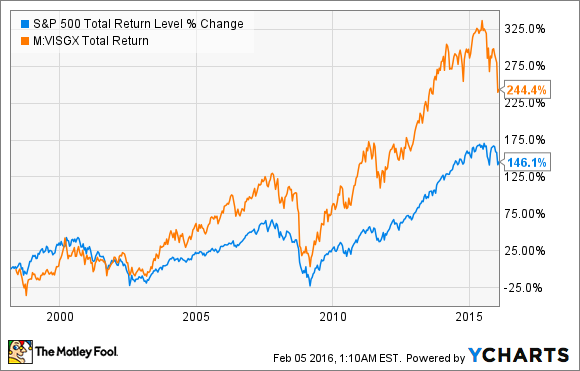 But there's an important caveat: This ETF isn't for the faint of heart. This ETF is down nearly 21% since last June, and will almost always fall further and faster than the rest of the stock market. But it tends to outperform when the market is on a roll, more than making up for the downside for long-term investors willing to ride out the volatility.

George Budwell: Small-cap stocks with multiple long-term value drivers are one of the best ways to invest $500, in my book. For example, I think the under-appreciated cancer immunotherapy company Agenus (AGEN -0.68%) could be an especially good investing vehicle for this amount of capital.

Agenus is developing several immune checkpoint inhibitors in the fight against cancer such as AGEN1884 and INCAGN1876, which are now on the cusp of entering clinical trials -- meaning that the company isn't overly dependent on a single product candidate to create shareholder value. Moreover, the biotech is targeting a market that's forecast to grow to an astounding $68 billion by 2018. That's an immense value proposition for a company with a market cap of roughly $240 million at the time of writing.

While there's no guarantee of success when it comes to experimental cancer drugs, Agenus' highly diversified immuno-oncology pipeline gives it a decent shot of a capturing at least a small slice of this highly competitive, yet massive, market going forward.

Tim Green: With just $500 to invest, I'd stick to a single stock or index fund in an effort to keep fees in check. While an argument can be made for investing this money in a broad index fund, I'd rather put it in an individual stock that has a chance of outperforming the major indices in the long run, while offering little risk of a major meltdown. No stock better fits that description than Warren Buffett's Berkshire Hathaway (BRK.B -0.60%)(BRK.A -0.47%).

You'll want to buy the B shares, given that the A shares trade for nearly $200,000 each. B shares closed Monday at $126.78 each. Berkshire is enormous, with a market capitalization in excess of $300 billion, and the law of large numbers will certainly make it more difficult for the company to produce market-beating returns in the future. The fact that Buffett won't be in charge forever may also cast some doubt over whether the company's incredible success can continue.

However, Berkshire operates businesses across a broad spectrum of industries, including insurance, energy, railroads, retail, housing, media, and consumer goods. The company is susceptible to an economic downturn, like most companies are, but the breadth of Berkshire's business offers some protection. Berkshire may not be able to match the incredible returns the company has achieved in the past going forward, but in terms of individual stocks, it's about as safe as it gets.