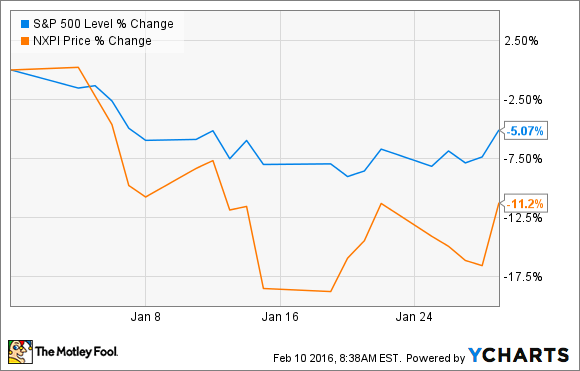 What: Shares of the NXP Semiconductors NV (NASDAQ:NXPI) fell 11.2% last month, according to S&P Global Market Intelligence data. NXP's stock price was hit hard, along with other iPhone suppliers, on news that the smartphone's demand is slowing.

So what: NXP is a leader in the near field communication (NFC) chip space, and its chips are used in the iPhone 6s and a host of other smartphones. That's been a very good thing for NXP in the past, as iPhone demand has been strong, but this month, things took a turn for the worst.

Rumors sprung up that iPhone demand is slowing, and Apple later confirmed that iPhone growth in fiscal Q2 will likely slow down. NXP investors took the iPhone's vulnerability as a bad sign for NXP and sold shares accordingly.

Now what: There are a few things for NXP investors to keep in mind here. The first is that slowing iPhone growth is now baked into NXP's stock price. So next quarter, investors should (hopefully) keep this mind if and when iPhone sales come in slow again next quarter.

Secondly, NXP's fate isn't exclusively tied to the iPhone. The company makes an array of processors, NFC chips, radio frequency chips, sensors, and software that in products from other manufacturers. The iPhone is important to NXP, but only focusing on that product can cause investors to miss the company's other opportunities.

Which leads us to NXP's recent acquisition of Freescale Semiconductor. NXP is now the fourth largest semiconductor company and the largest vendor for automotive semiconductors. This puts it in a great position to benefit from both the growing wearable technology market and connected automotive market.

As an supplier, iPhone demand is still important to NXP, but it shouldn't be seen as the company's only prospect. Investors need to look ahead to NXP's strong position in the semiconductor space, and treat its stock accordingly.