Any more weakness from oil prices, a decline in industry-wide downstream margins, and a shrinking cash cushion could all significantly impact share prices at ExxonMobil.

It's been a long, long time since the oil and gas industry has faced such a severe downturn. To see the stress these companies are under right now, you need only look at ExxonMobil (XOM 2.23%). For decades, ExxonMobil has been the stoic oil and gas company investing through the cycle with incredible consistency. Yet on the company's most recent conference call, we actually heard it talk about investing more conservatively in this down cycle.

Shares of ExxonMobil are down 22% from their highs in 2014. While there are reasons to think ExxonMobil is one of the best in the business and a great investment in a down market, there are still reasons ExxonMobil's stock could fall even more than it already has. Here are three reasons shares could fall further and what it investors should do about it.

Continued low oil price environment
This one is a real no-brainer, but it's definitely worth keeping in mind at all times. As an integrated oil and gas company, ExxonMobil and its peers have assets throughout the entire value chain of oil and gas. In a commodity market, this means when one part of the business does well, it's typically at the expense of the other.

Keep in mind, though, that having a portfolio with assets in each part of the value chain does not mean they play an equal part in the company's income statement. For many years now, the exploration and production side of the business has generated an outsized portion of the company's earnings. As oil prices have declined, this part of the business has suffered the most, and the company's other business segments such as refining and chemical manufacturing don't have the footprint to make up for all of production's shortcomings.

As unimpressive as last quarter's results were, last quarter's average benchmark prices for oil were $43 per barrel and $2.27 per thousand cubic feet for Brent oil and Henry Hub natural gas, respectively. Since, then, though, oil prices for most of this quarter have been well below that. Another quarter with lower oil and gas prices would eat even further into ExxonMobil's upstream earnings, and shares probably wouldn't respond well to that.

Downstream earnings may not be the savior it was in previous quarters
For the past several quarters, ExxonMobil's earnings have been slightly more resilient than most of its peers because it has a lower cost of upstream supply. At the same time, though, its refining and chemical businesses have been posting extraordinary results, which has made the overall situation look much better.

Recently, though, we have seen downstream profits from refiners start to decline as the margin between crude oil and refined products such as gasoline and diesel has shrunk. If refining margins were to simply revert back to historical averages in the coming months, it would translate to much lower earnings across ExxonMobil's non-production business segments. With earnings already looking tough, this would be a double whammy that would not be well received by the market.

Cash flow is getting really tight
One thing to always keep in mind when looking at capital-intense businesses like ExxonMobil is that cash is king. The high levels of investment and the way commodities are held on balance sheets typically mean there are a lot of non-cash expenses on the income statement like depreciation and writedowns. So, the company's bottom-line earnings may not completely reflect its overall heath. Cash flow, on the other hand, strips out all of these things, and all you're left with is what money came in the door and what was spent.

All things considered, ExxonMobil's cash situation has held up relatively well. Despite having a few years of high investment level and now a much lower oil price, the company has been able to generate more cash from operations than what it has on capital expenditures and it has been able to cover some of its shareholder payments. This past year, though, ExxonMobil's cash situation has become much tighter. 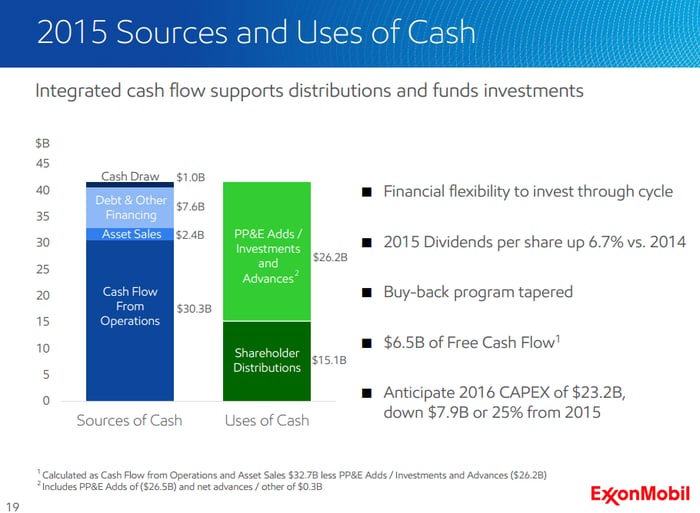 Based on what we've seen from the oil and gas market so far this year, it doesn't look like the company's cash situation is going to get much better. Management expects capital spending to decrease 25% from last year, and the company's share repurchase program could easily be suspended without causing too much of a panic. Beyond that, though, the company may have to lean on debt and asset sales even more to cover any cash shortfalls.

The chances of seeing the company cut its dividend isn't completely out of the question, but the situation would need to be dour for a while longer before that becomes an option. Either way, if the company's cash-generating abilities were to deteriorate any further in the coming year, ExxonMobil could be facing some tough capital allocation decisions, and if any of that cash going to shareholder distributions gets severely cut, you can probably imagine what kind of reaction shares will have to that.

What a Fool believes
As strong of an operator ExxonMobil is in the oil and gas space, it's still a price taker in the much broader market and can fall victim to falling oil prices and declining margins across the other components of the business. Shares may decline as oil prices remain weak, but longer-term investors need to be able to look beyond these things. Unless we really start to see some significant signs of strain on the cash end of the business, or a bloated balance sheet, investors should probably shake off any near-term share price declines.