Please ensure Javascript is enabled for purposes of website accessibility
Log In Help Join The Motley Fool
Free Article Join Over 1 Million Premium Members And Get More In-Depth Stock Guidance and Research
By Andrés Cardenal - Feb 16, 2016 at 9:11AM

Successful investing is not just about finding winning stocks. Avoiding big losers can be equally important.

Successful investing is not just about picking the right stocks. Avoiding companies with deteriorating fundamentals can be even more important when it comes to maximizing your returns. This is why I plan to steer clear of Philip Morris (PM -0.23%), GoPro (GPRO 1.94%), and Sears Holdings (SHLDQ).

Philip Morris can be hazardous to your wealth
I like putting my money behind companies that are doing something good for the world, or at the very least that aren't hurting society with their products. Cigarettes are addictive and tremendously damaging; I don't want to own a company that makes money selling such toxic products. Ethical considerations come first in my decision to stay away from Philip Morris stock, but I also think the company looks like a lousy proposition from a financial point of view.

Philip Morris owns the international rights to the popular Marlboro brand outside of China and the U.S. This is a key strategic advantage in a business whose customers are remarkably loyal to their favorite brands. Its management estimates that Philip Morris controls a gargantuan 28.2% market share in the countries where it operates. However, tobacco consumption is declining across the world, and Philip Morris will suffer from that trend.

Management calculates that international cigarette industry volume excluding China and the U.S. declined by 2.4% in 2015, and the decline for 2016 is estimated to be in the 2% to 2.5% range. Philip Morris has buffered the decline in sales volume with price increases and strict cost controls over the last several years. But this is hardly a sustainable strategy to drive long-term growth. Sooner or later, falling demand will hurt the company's cash flow and earnings, which would be a major problem for investors in Philip Morris.

The stock yields 4.6% at its current price. However, its payout ratio is high, at more than 90% of earnings forecasts for 2016. This doesn't leave much room for error. If earnings start moving in the wrong direction in the years ahead, then investors in Philip Morris could face a dividend cut from the tobacco giant.

GoPro has an identity crisis
Shares of GoPro are down by almost 75% from their highs of the past year, due to its disappointing financial performance over the last several quarters and its uninspiring guidance for 2016. It may be tempting to consider GoPro a bargain at current levels, but there is little to indicate when or how GoPro could improve its performance.

The company registered a 31% decline in revenue in the fourth quarter compared to the year-ago period. It also produced an operating loss of $41.3 million during the period. Perhaps even worse, management is forecasting revenue during the first quarter of 2016 to be between $160 million and $180 million -- a decline of nearly 47% at the midpoint from the $363 million it recorded in the first quarter of 2015.

GoPro's action-cameras are mostly a niche product, and demand seems to be waning. There's not much the company can do to create more demand at this stage, other than hope that new iterations of its products catch on with consumers. Management says it intends to transform GoPro into a product for the masses, moving beyond video enthusiasts and extreme sports aficionados to target a much wider audience. However,  when almost everyone is already carrying a decent camera incorporated into their smartphone, most ordinary consumers don't have an incentive to pay up for a high-performance GoPro action-camera.

Sears Holdings is damaged merchandise
The retail industry has always been competitive, and the online retail revolution is making things even harder for brick-and-mortar players. Sears Holdings' sales have been declining for over a decade, and management doesn't seem to have a sustainable strategy to turn that around. 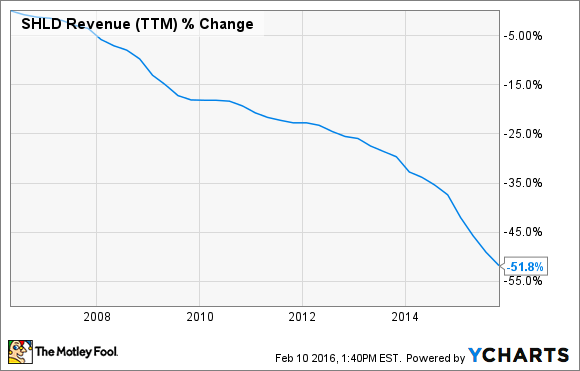 Sears has resorted to offering big discounts to attract customers to its stores. But this narrows its margins and potentially erodes its brand power. Besides, cost cuts across different areas are damaging the customer experience. In other words, most of the initiatives management is implementing seem to be backfiring.

Judging by the latest financial reports from Sears, there is no light at the end of the tunnel. Its management recently announced that the company expects same-store sales to decline by 9.2% during fiscal 2015 -- broken down as a 7.3% decline in Kmart's comp-store sales and an 11.1% dip at Sears' domestic operations.

Sears is selling its real estate assets to generate cash, and management is also accelerating store closings over the coming months. This is a smart thing to do in order to alleviate the immediate problems in the company's financial situation. However, I would stay away from Sears stock until -- or unless -- the company finds a clear path to achieve a sustainable turnaround.

Andrés Cardenal has no position in any stocks mentioned. The Motley Fool owns shares of and recommends GoPro. Try any of our Foolish newsletter services free for 30 days. We Fools may not all hold the same opinions, but we all believe that considering a diverse range of insights makes us better investors. The Motley Fool has a disclosure policy.