Indexes are up nearly 4% over the last two trading days. 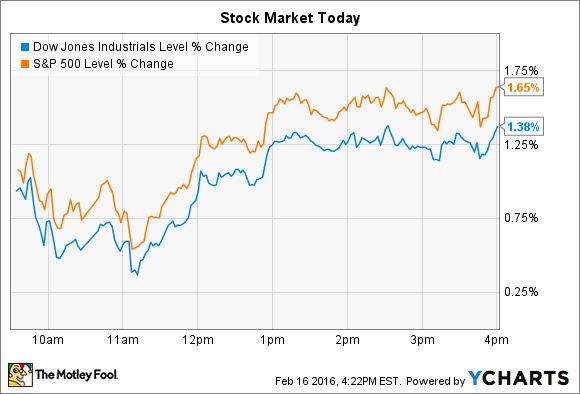 Investors had loads of news from the long weekend to digest, including a promise by Saudi Arabia and Russia to halt their oil production as long as other big exporters joined in. Additionally, yesterday officials at the European Central Bank said that they stood ready to increase stimulus measures at their meeting next month, if needed .

AMC's record weekend
AMC Theaters' stock jumped up 9% after an especially strong President's Day weekend at the box office. Action film Deadpool raced to a $133 million opening and shattered records for an R-rated movie launch (the previous record was held by The Matrix Reloaded in 2003 ). The film also set several new high-water marks for IMAX showings, and, as the nation's largest IMAX exhibitor, AMC stands to benefit disproportionately from that strong ticket demand .

AMC's attendance levels, and the profitable food and beverage sales that go with them, are tracking solidly higher through the first three quarters of 2015. In fact, 7.4% more movie fans bought tickets through Q3 on 2015, which beat overall industry growth by nearly 4 percentage points. One reason for that industry-beating customer traffic: Capital expenditures are up as the company spends heavily on comfort upgrades like recliner seats.

That traffic momentum was one reason why management in November said that they expect to post a record-setting fourth quarter and all-time high box office year when the company announces Q4 results on Feb. 29. Wall Street agrees, as consensus estimates call for AMC to post a hefty 13% revenue boost as earnings improve to $0.40 per share from $0.32 per share in the year ago period.

These two fast food giants can only expect to keep bumping into each other over the next few years. Restaurant Brands calls the U.S. market a "must win" geography for the Tim Hortons brand, and it has stepped up its plans for adding locations, most recently with big franchisee agreements in the Cincinnati and Columbus metro areas. "We continue to be excited about future opportunities at Tim Hortons and Burger King," CEO Daniel Schwartz said in a press release, "and are committed to building long-term sustainable growth for years to come."

Demitrios Kalogeropoulos owns shares of McDonald's. The Motley Fool has no position in any of the stocks mentioned. Try any of our Foolish newsletter services free for 30 days. We Fools may not all hold the same opinions, but we all believe that considering a diverse range of insights makes us better investors. The Motley Fool has a disclosure policy.

Prediction: These Could Be The Best Growth Stocks in 2030