Please ensure Javascript is enabled for purposes of website accessibility
Log In Help Join The Motley Fool
Free Article Join Over 1 Million Premium Members And Get More In-Depth Stock Guidance and Research
By Rick Munarriz - Feb 16, 2016 at 9:05AM

The country's leading cable and broadband provider has a publicized service outage yesterday. 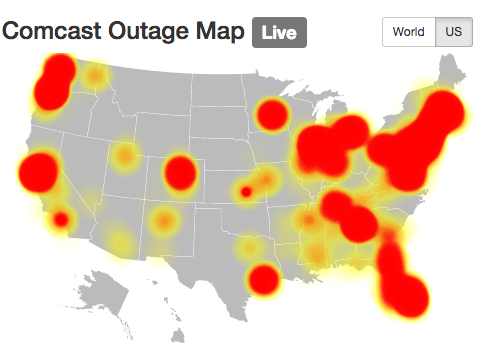 There's never a good time for a network outage, but Comcast (CMCSA 0.20%) (NASDAQ: CMCSK) left a lot of subscribers without access to their cable television and Internet services yesterday.

Having your cable, Internet, and/or phone go out for several hours is never fun, but it's obviously not exclusively Comcast's domain. Bundle-happy providers of cable and satellite television are notoriously unreliable. It's no surprise that when Consumerist held its annual Worst Company in America reader survey award in 2014 that Comcast took top honors. Many of the finalists were Comcast's smaller peers.

However, the two problematic aspects of this outage were that it was far-reaching and that social media blew up with claims that Comcast's toll-free customer service number was also not working.

Comcast claimed to have the problem largely contained by Monday afternoon, but a quick view of Comcast's live outage map as of 11 p.m. ET last night showed that the reports of failing service were still trickling in late into the day.

There may never be an ideal time for an entertainment service provider to let down their paying customers, but this does come at a delicate time for Comcast. For starters, Comcast closed out the holiday quarter with 22.383 million video customers, 89,000 more cable subscribers than it had just three months earlier. That may not seem like a lot, but it was Comcast's most successful quarter in eight years.

If your utility or cell phone service was routinely out like your cable television or Internet the country would be in an uproar. We have grown used to intermittent outages and the occasionally pronounced downtime.

This will naturally hurt Comcast's reputation. The widely despised company had been making some decent headway in improving in consumer-facing operations. It announced nine months ago that it would be creating thousands of new customer service jobs. It also made things easier for customers to "cut the cord" by teaming up with UPS to take in the return of rented cable and Internet modem equipment for free. I can vouch for the convenience of that service where you just show up at a UPS store and drop off cable boxes and remote.

However, improving the customer experience won't sit well with consumers if outages continue. Cable bills creep higher with every passing year as networks demand higher rates for their channels. Any kind of downtime that receives national attention -- and yesterday's hiccup did exactly that -- will make it that much harder to boost retention. Comcast can't disconnect from its customers in more ways than one.