Please ensure Javascript is enabled for purposes of website accessibility
Log In Help Join The Motley Fool
Free Article Join Over 1 Million Premium Members And Get More In-Depth Stock Guidance and Research
By John Abbink - Feb 16, 2016 at 10:34AM

Because of its close relation to consumer staples, Crown gets generous treatment from investors compared to other industrials. But estimates for 2016 rely on acquisitions it can't afford and demand growth that isn't likely to occur.

Crown Holdings (CCK 2.81%) is more truly multinational than most American companies: The U.S. and Canada contributed only 28% of its 2014 revenue. Founded in 1891, within 15 years it was manufacturing in Brazil, France, Germany, Japan, and the U.K. Today it operates from 149 plants in 40 countries -- metal packaging is a local business, with plants close to production. Because of its close relation to consumer staples, Crown gets generous treatment from investors compared to other industrials. But estimates for 2016 rely on acquisitions it can't afford and demand growth that isn't likely to occur.

The market likes growth with low cyclicality
Crown has attracted investor interest as an industrial company with limited cyclicality, because its customers are primarily in the consumer staples industry. And it has a strong record of growth, primarily driven by acquisition. As a local business, packaging is geographically fragmented, and the opportunities to acquire are numerous. Most recently it purchased Mivisa, the leader in the Spanish, Portuguese, and Moroccan food canning markets, with $600 million in sales, and Empaque, Mexico's largest maker of beverage containers, with $700 million in sales.

This accounts for Crown's comparatively benign treatment by a stock market that developed severe allergies during 2015 to cyclical industrials, particularly those with significant foreign currency exposure: 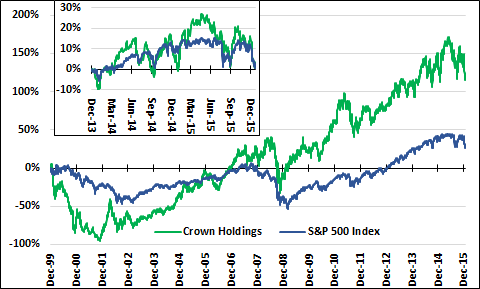 Crown also has substantial exposure to China -- something for which the markets have also been unforgiving. Without the support of a dividend or share buybacks, all this generosity to Crown must rely on its record of growth through acquisition and limited cyclicality. Analysts polled by Yahoo! Finance expect its earnings to increase by 9.2% in 2016, and it's trading at 11.8 times that estimate, which doesn't seem expensive, given that it was trading at 14.4 last June.

But acquiring growth is tough on Crown's balance sheet
But is the market willing to continue to cut Crown so much slack, particularly given the likelihood that interest rates will rise over the course of the year, currencies will continue to be a challenge, and its balance sheet will be unable to support significant acquisitions for several years?

Crown's finances are stretched. Equity items accounted for only 8.5% of its nine-month balance sheet total and intangibles such as goodwill for 35.8%. It can carry this degree of leverage because its cash-flow generation is both consistent and strong. However, it can't increase it much, so it has no choice but to concentrate on balance-sheet repair rather than additional purchases over the next several years. The fragmented nature of Crown's industry means that there will continue to be plenty of acquisition opportunities for it, but it will have to concentrate on balance sheet repair first.

So where's the growth going to come from?
It's not clear where the analysts expect the 9.2% growth they've forecast for 2016 to come from if Crown can't acquire. There will be an extra 49 days' contribution from Empaque, which wasn't consolidated until last February. That may be good for an incremental $90 million in revenue. Crown's largest currency exposure is to the euro, where comparisons will cease to be negative by the end of March, unless the euro resumes its slide. Assuming it doesn't, and that currency deterioration elsewhere doesn't offset the benefit, this might be good for $40 million incremental revenue.

But that doesn't add up to the increase analysts are looking for, which bears no relationship to Crown's much lower rate of growth in 2015, excluding currency effects and acquisitions. Metal packaging is a mature industry, and while there's continued growth potential in emerging markets, it hasn't produced strong growth in 2015, and there's no reason to expect it to in 2016: Investment in a new plant during 2015 will only contribute to growth at the margin. The analysts' consensus seems remarkably optimistic, but this probably won't become apparent until Q2. Q1 is expected to be seasonally weak at the best of times.

It's often worth asking why a portfolio manager chooses a stock. If you think about it, Crown Holdings is a peculiar animal: unquestionably an industrial, but one that has little cyclicality. Although it sells a little equipment, the bulk of its revenue derives from consumables that are sold, unit for unit, with food and beverages. Demand can't grow rapidly. So why would a portfolio manager own Crown rather than the companies using its packages? One answer is that Crown is classified as an industrial. Managers who are reluctant to own cyclical companies can convince themselves and their customers that they're diversified by owning Crown. The fact that this is obviously silly doesn't make it less true.

There are plenty of good reasons portfolio managers didn't want to own major American industrials in 2015. Many of them seem to have held Crown as an alternative. This strategy will probably unwind in 2016, and the fact that hedge funds seem to have been prominent participants, presumably encouraged by estimates that simply aren't realistic, suggests that investors would do well to avoid the stock until it has corrected further, or at least until Crown demonstrates that it can repair its balance sheet.

John Abbink has no position in any stocks mentioned. The Motley Fool has no position in any of the stocks mentioned. Try any of our Foolish newsletter services free for 30 days. We Fools may not all hold the same opinions, but we all believe that considering a diverse range of insights makes us better investors. The Motley Fool has a disclosure policy.

These Were the 10 Best Industrial Stocks of 2019