With plenty of cash on hand, and more cash coming in the door, this oil company is on the lower risk end of the spectrum.

With a lower for longer oil price scenario increasingly becoming the reality, investors are reevaluating what risk means for oil companies. Metrics that looked just fine when oil prices were elevated are now gravely concerning at many companies. Because of this investors are looking at risk in a whole new way, focusing their attention on just two things: cash and cash flow. Companies that have a lot of both are viewed as having the least amount of risk of going bankrupt should oil prices remain depressed. One company that is on the lower end of the risk spectrum is Occidental Petroleum (OXY 4.77%) because it has plenty of both to meet its needs for more than a year at the current oil price.

Stilling on a pile of cash
As of the end of 2015 Occidental Petroleum had $4.4 billion of cash on its balance sheet against just $6.8 billion in long-term debt. Because of this the company has a very strong investment grade credit rating. That cash balance alone is more than enough to meet the company's minimum projected liabilities for 2016, which includes $1.5 billion in current maturities of long-term debt as well as the company's maximum $3 billion capex plan for 2016. That puts the company in a strong position in 2016, because unlike a lot of peers it doesn't have to worry about its liquidity or credit, meaning risks to either are virtually nil right now.

Operational cash flow buoyed by diversification
Cash flow is a slightly different story because lower commodity prices are going to weigh on Occidental Petroleum's operational cash flow. However, the company's diversification helps it mute some of this weakness. For example, it has a very large enhanced oil recovery business in the Permian Basin that continues to produce a lot of cash flow. As the slide below shows, the company's cash costs can be as low as $22 per barrel of oil equivalent, which means it's still delivering solid cash flow at today's oil price: 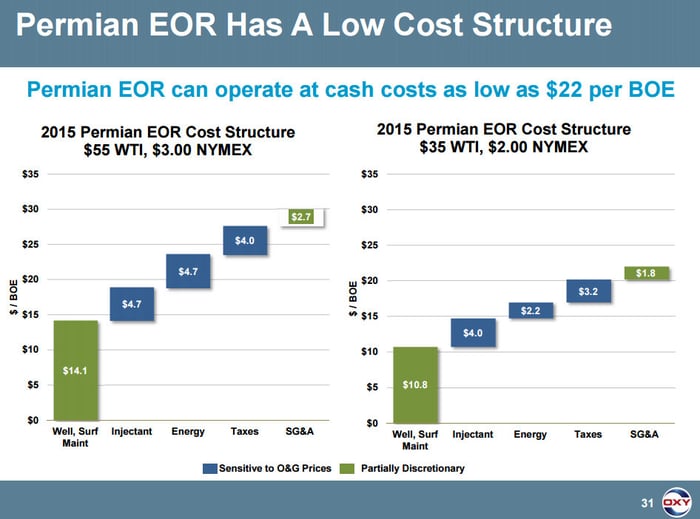 Further, Occidental Petroleum's cash flow is supported by its predictable chemicals business as well as high margin operations in Colombia and the Middle East, including the Al Hosn gas project in Oman, which is expected to deliver between $300 million to $600 million in cash flow depending on commodity prices.

Even more cash is coming in the door
Not only does the company have plenty of cash already on the balance sheet, and diversified sources of operational cash flow, but it has two other sources of cash coming in the door very soon. First, Occidental Petroleum is expected to receive about $900 million more from its settlement with Ecuador. That settlement is compensating the company after Ecuador seized one of its oil fields in the country in 2006 and is expected to be fully paid by April. In addition to that, Occidental Petroleum expects to receive $300 million from assets sales in the coming months. These guaranteed cash payments further enhance Occidental's near-term liquidity.

Standing behind the dividend
A big evidence that Occidental Petroleum is less risky than most other producers right now is the fact that the company has no plans to cut its dividend. In fact, president Vicki Hollub recently said that the company doesn't "see a threat to our dividend going through the cycle." That's in stark contrast to rivals ConocoPhillips (COP 3.24%) and Anadarko Petroleum (APC), both of which recently reduced their payouts.

ConocoPhillips' dividend cut in particular was surprising because the company had said that its dividend was its top priority. However, it has realized that it simply didn't have the cash balance, nor the projected cash inflow, to comfortably maintain the payout given that industry conditions have continued to deteriorate. Anadarko Petroleum, likewise, took what it viewed was the appropriate action given the current environment and its own financial limitations. In both cases the companies freed up a significant amount of cash flow that they can use to enhance their operations and financial flexibility, with Anadarko freeing up $450 million while ConocoPhillips' dividend and capex reductions freed up a whopping $4.4 billion. While Occidental Petroleum could likewise free up a significant amount of cash flow, upwards of $2.3 billion if it suspended its payout all together, it didn't need to do so because of its solid financial position at the moment.

Investor presentation
While Occidental Petroleum isn't without risk, its strong cash balance, diversified cash flows, and additional sources of cash make it one of the least risky oil companies right now. A big evidence of its lower risk is the fact that the company is standing behind its dividend at a time when most of its rivals are slashing theirs. This isn't to say that the company's risks won't increase should oil be even lower this time next year, but at least for the time being Occidental Petroleum is in a much stronger financial position than most of its peers.