Please ensure Javascript is enabled for purposes of website accessibility
Log In Help Join The Motley Fool
Free Article Join Over 1 Million Premium Members And Get More In-Depth Stock Guidance and Research
By Reuben Gregg Brewer - Feb 16, 2016 at 9:30AM

Freeport McMoRan is struggling, but that didn't stop it from dishing out a big payday to its ousted co-founder.

Freeport McMoRan (FCX -0.20%) has been in the news for all the wrong financial reasons. One of the biggest headlines, however, is the company's stumble in the oil patch, which helps explain why James Moffett, co-founder and a chief architect of the ill-timed oil expansion, is out as chairman of the board.

He's getting $83 million as he exits. Here's what shareholders got.

A big move
It wasn't too long ago that Freeport was a miner. But in 2013, when oil prices were high, it bought McMoRan Exploration Co. and Plains Exploration for roughly $9 billion. In the end, the deal led to an explosion in Freeport's debt, which stood at nearly $20 billion at the end of 2015. Before the big oil deal, debt was only about $3.5 billion. Putting some perspective on those two numbers, debt as a percentage of the capital structure was 15% before the acquisitions and over 60% at the end last year.

With oil prices in free fall since around mid-2014, the oil business has turned from a promising opportunity into a weight around Freeport's neck. In fact, it eats more cash than every other business segment. The following chart shows just how tied to oil the company appears to be, with the shares falling right along with the decline in Brent crude. It's little wonder that Freeport McMoRan is looking at strategic options for the oil business, and why one of the chief architects of the oil acquisition is out. 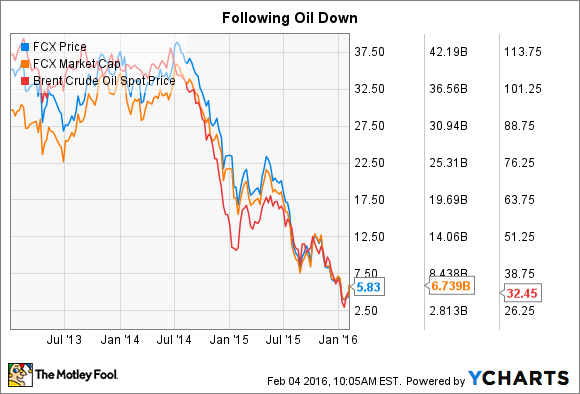 What was your cost?
According to reports, Moffett will walk away with around $63 million in cash retirement plans, about $16 million in severance, and a few million in performance-related stock awards. Don't feel too bad for him. He's also going to stick around and consult, for which he's expected to be paid around $1.5 million a year. Tough life.

So what did you get? For starters, the stock is down over 80% since the start of 2013. Rounding, to keep the math easy, Freeport went from a $40 billion-market-cap company to around a $7 billion cap. That's more than $30 billion lost. It may not be fair to peg all of that on the oil business, except that investor perception of that business has been a huge driver of the market price -- so maybe it is fair.

But that's not all. The company also issued around 210 million shares in the second half of 2015, raising about $2 billion to help shore up the balance sheet. Solidifying Freeport's finances is important, but selling stock when the shares are down 80% from where they were just two years ago isn't exactly a great benefit to current shareholders. So add a healthy slug of shareholder dilution (around 20%) to what you got.

Then there's the not so subtle fact that Freeport eliminated its dividend in an effort to save cash. Although you didn't exactly "get" anything on this one, what you aren't getting anymore just adds insult to injury. In 2013 the company's annual dividend was $1.25 a share. Starting in the new year, that will be zero.

Not fair!
It isn't fair to hit Moffett with all these negatives. Clearly, there was a whole company around him that was involved, too. And at this point, Freeport McMoRan is trying to do the best it can in a bad situation. So some of the moves, despite being unfriendly to shareholders, are the right decisions to ensure the company remains a going concern. But for investors, it's hard to look at what Moffett is walking away with and not think about how much this whole episode has cost them.

The answer, obviously, is a lot. I think the takeaway here, however, is a bit different from that: Be leery of big, transformative acquisitions. They don't always work out as planned.

As another example, look at BHP Billiton (BHP -3.65%), which recently sold off its smaller operations as South32 with the mining industry facing a deep downturn. BHP's goal was to focus on core businesses. Yet the logic for having BHP and Billiton team up in 2001 was diversification. Granted, this marriage lasted for well over a decade, but when all was said and done, it didn't work out as expected, either.

And if things go very wrong, as with Freeport's oil foray, you, the shareholder, are the one who's likely to feel the most pain.