The situation in Macau seems to be improving, and companies such as Las Vegas Sands, Wynn Resorts, and Melco Crown offer big upside potential when things turn for the better. 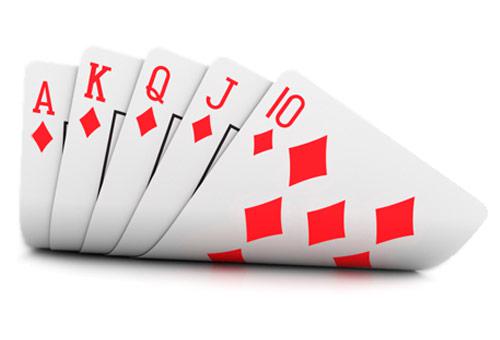 Macau, the only region in China where gambling is legal, has been going through significant turmoil over the past couple of years, and this is inflicting a lot of damage on casino operators with big exposure to the region, such as Las Vegas Sands (LVS 5.86%), Wynn Resorts (WYNN 12.05%), and Melco Crown (MLCO 8.14%).

While it's hard to tell what could happen in the short term, the slowdown in Macau should be transitory rather than permanent. Once the situation turns for the better, these casino operators could deliver big upside potential for investors. And recent data suggest that maybe, just maybe, things are slowly starting to improve in Macau.

Is there a light at the end of the tunnel?
The Chinese government has imposed a series of restrictions and regulations to fight corruption and illegal money laundering via Macau casinos, including credit and visa restrictions on VIP gamers. Making things worse, the economy in China has been remarkably unstable over the last several quarters, and this is clearly having a negative impact on overall discretionary spending in the country.

Macau gaming demand started declining in June of 2014, and there has not been a single month with positive revenue statistics since then. This has been devastating for casinos with big exposure to Macau: Las Vegas Sands stock is down 43%, Wynn Resorts has declined 68%, and Melco Crown has crashed by 60% since June 2014. 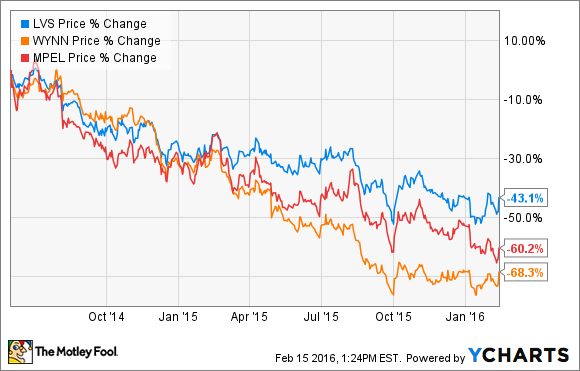 The situation in Macau remains quite uncertain, and economic weakness in China is a major reason for concern on a global scale, so it's far too early to say that demand in Macau is definitively improving. On the other hand, recent information is providing some reasons for hope.

According to data from the Macau Gaming Inspection and Coordination Bureau, monthly gaming revenue in January of 2016 declined 21.4% versus the same month in 2015. At first glance this does not look like a big reason for optimism, however, it's important to keep in mind that the accumulated decline through the whole year 2015 was a much bigger 34.3%, so maybe things are starting to stabilize. At least the rate of decline has clearly slowed down, and this could be a small step in the right direction.

Adding to the optimistic tone, Steve Wynn, CEO of Wynn Resorts, said during the company's latest earnings conference call that things are clearly improving in January. In his own words: "January was our best month in a long time. Happy to Say so." Wynn also said that most of the strength was concentrated in the mass market, while it's still too early to tell about the VIP segment.

How to bet on a Macau recovery
Even if the data from January provides some reasons for cautious optimism, one month of positive data does not make a trend. Especially if the economy in China remains under pressure, trying to time the turnaround in Macau could be a risky idea. On the other hand, year-over-year comparisons are getting easier in the coming months, and the long-term prospects for Macau casinos look remarkably promising.

According to estimates by ANZ Research, 326 million people will join the Chinese middle class during the period going from 2015 to 2030, and this should drive big increases in Chinese discretionary spending. Since Macau is uniquely positioned to profit from this boom, it makes sense to tolerate the short-term uncertainty in exchange for exceptional long-term opportunities.

Las Vegas Sands is the market leader in Macau. Management calculates that the company will own 45% of available hotel rooms among casino operators in the region by 2017. Las Vegas Sands makes nearly 52% of hold-normalized EBITDA from Macau, while Singapore generates 35% and the United States the remaining 13%. Furthermore, Las Vegas Sands stock pays a big dividend yield of 6.5%, so investors are being rewarded with big cash distributions while they wait for the situation in Macau to definitively improve.

Wynn Resorts produced nearly 55% of EBITDA from Macau in the fourth quarter of 2015. The company is more exposed to the VIP market than Las Vegas Sands, though, and this can be a disadvantage since most of the early recovery signs seem to be concentrated in the mass market. Wynn Resorts stocks carries a dividend yield of 2.9%, so Las Vegas Sands looks like a better choice for dividend-oriented investors.

Melco Crown has recently opened its City of Dreams casino in Manila, Philippines, but most of the company's sales and profits still come from Macau, where Melco Crown operates its Altira, City of Dreams, and Studio City casinos, in addition to its Mocha Clubs electronic gaming machines. High exposure to Macau could mean big upside potential for investors in Melco Crown once things turn for the better in the region, but its dividend yield is comparatively low at only 0.5%.

Only time will tell if the worst is already over for Macau casinos, but the slowdown should be temporary, and the main point to consider is that companies such as Las Vegas Sands, Wynn Resorts, and Melco Crown offer abundant room for gains over the long term.