The auto parts retailer is playing catch-up to O'Reilly Automotive and AutoZone, but what about its investment proposition?

Advance Auto Parts (AAP 0.20%) offers a lot to investors in 2016: It's a deep-value stock in a recession-resistant industry. Same-store sales increased during the last recession for it, O'Reilly Automotive (ORLY -0.85%), and AutoZone (AZO -1.01%), and through its 2014 acquisition of General Parts International (owner of Carquest and Worldpac), the company has an opportunity to raise its margin to the level of its peers.

Let's take a look at the latest fourth-quarter results and asses the investment proposition.

Putting these points into context, consider management's target of 12% earnings before interest and tax (EBIT) margin by 2017. Advance Auto ended 2015 with an adjusted EBIT margin of around 10%, so the intended move to 12% by the end of the year represents a significant step.

Here's a look at enterprise value (market cap plus net debt) to EBIT: 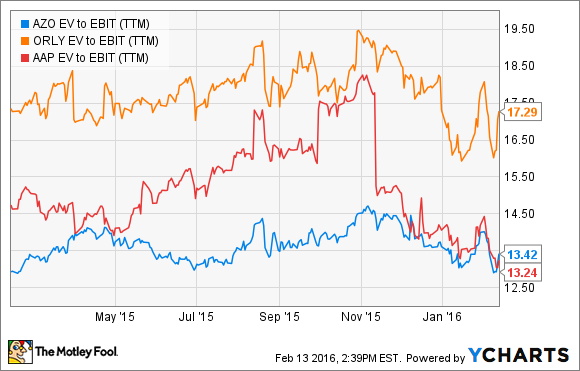 Analyst estimates are for $9.83 billion in revenue for 2016, so if Advance Auto hits the 12% target (for argument's sake, let's assume investors will price it as 12% for the full year) then EBIT gets to $1.18 billion.

Arguably, Advance Auto should trade at a multiple closer to O'Reilly's than AutoZone's, because its DIFM and DIY sales are more balanced (actually, Advance Auto already has a larger share of revenue from DIFM), and AutoZone has more than 80% of its sales in the less-attractive DIY market.

What management needs to do
In the recent fourth-quarter earnings presentation, management did the following:

The EBIT margin improvement is intended to include 100 basis points from selling, general, and administrative (SG&A) expenses (including 50 basis points of cost synergies), and the rest is dependent on leverage from increased sales. Here's CEO George Sherman on the earnings call: "Yes, we know the size of the improvement that it represents, 10% to 12%, and it certainly would be aided quite a bit by the top line that we expect. So the leverage portion of this is important, but we have clearly over-indexed on the expense side."

Clearly, the company needs the "modest" revenue growth (which tallies with the 1% growth expected by analysts) management predicted for 2016 -- cost savings will not be enough.

The tricky bit
Unfortunately, the integration of Carquest is proving more complex than expected, and the company has reported three disappointing earnings reports in a row and cited customer disruptions caused by integrating Carquest. 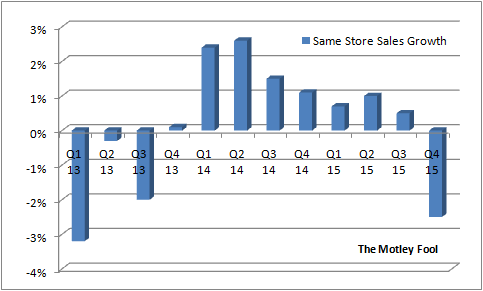 Moreover, current trading isn't much better. According to Sherman on the earnings call: "If you look at Q1 so far, sequentially we've seen some progress, but it is not up to what our expectations are right now."

And this comes at a time when AutoZone's same-store sales increased 3.5% in its last reported quarter, while O'Reilly Automotive (recall that it's a DIFM-heavy company like Advance Auto) increased same-store sales by 7.7% in its fourth quarter.

Two scenarios
Looking ahead, there are two possible outcomes in 2016. The first involves a lowering of full-year expectations -- Advance Auto is searching for a new CEO, and he might do that if/when appointed -- which would hit the stock price in the near term.

A buy?
In a sense, it's a classic deep-value investing conundrum: near-term risk vs. long-term value. Frankly, I think investors should view the proposition favorably, because O'Reilly And AutoZone are giving good sales numbers -- evidence that the environment remains favorable -- and investing in a company that could benefit from low gasoline prices (more miles driven equals more automobile wear and tear) is a good place to be in the current environment. Advance Auto may well disappoint operationally, but on balance, it's a good value.

Lee Samaha has no position in any stocks mentioned. The Motley Fool owns shares of O'Reilly Automotive. We Fools may not all hold the same opinions, but we all believe that considering a diverse range of insights makes us better investors. The Motley Fool has a disclosure policy.

Why Shares in Advance Auto Parts Slumped This Week

Why Advance Auto Parts Stock Soared in May

5 Investment Trends to Profit From a Post-Coronavirus World
370%