Please ensure Javascript is enabled for purposes of website accessibility
Log In Help Join The Motley Fool
Free Article Join Over 1 Million Premium Members And Get More In-Depth Stock Guidance and Research
By Adam Levine-Weinberg - Feb 16, 2016 at 9:30AM

Despite a weak third quarter, Nordstrom remains a solid company for long-term investors.

Investors in the department store space have had a rough time in the past year. Just since last summer, formerly high-flying stocks in the sector like Nordstrom (JWN 5.14%) and Macy's (M 4.02%) have come back to earth, losing around 40% of their value. 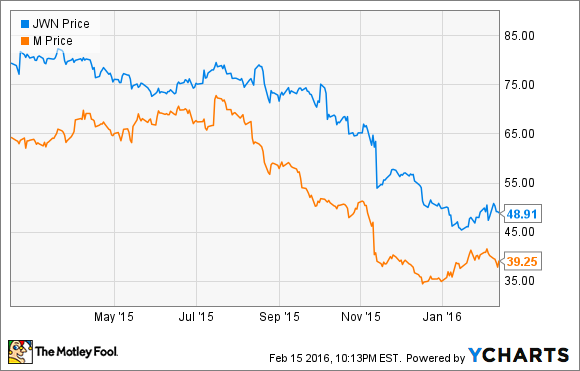 The dreadful stock performances came in the context of weakening sales trends for department stores across the entire pricing spectrum. The key question now is whether Nordstrom, Macy's, and their peers are just facing a blip in demand or if there has been a permanent change in the industry landscape. Fortunately, the long-term outlook remains bright -- at least for Nordstrom.

Macy's has been falling short
Macy's, the largest department store chain in the world, felt the impact of the current slowdown before anyone else. Yet Macy's executives didn't recognize it at first. Macy's comparable-store sales declined modestly during Q1, yet as of May, the company's guidance still called for full-year comp sales growth of about 2%.

As the sales trend deteriorated, Macy's had to cut its 2015 full-year guidance several times. Its most recent guidance entails a 2.7% full-year comp sales decline (again including licensed departments). As of a few weeks ago, Macy's expected to report adjusted earnings per share of $3.54 to $3.59 for the full year, miles below its original guidance of $4.70 to $4.80.

The situation is different at Nordstrom
Nordstrom also faced a significant sales slowdown in Q3, which led to a big earnings miss. As a result, the company pared back its full-year 2015 sales guidance and reduced its EPS outlook by about 8% due to a weaker gross margin performance.

However, that's where the similarities end. Whereas Macy's struggled to grow sales throughout 2015, Nordstrom performed quite well in the first half of the year. In fact, before cutting its guidance in November, Nordstrom had actually raised its guidance in August.

Nordstrom delivered strong sales growth in the first half of 2015. Image source: The Motley Fool.

Nordstrom still needs to improve
Thus, while investors have treated Macy's and Nordstrom as two of a kind in recent months, the scale of the problems at Nordstrom is much smaller. Nevertheless, the company needs to perform better than it did during Q3.

Nordstrom also saw a 2.2% comp sales decline in its full-line stores during Q3. However, it's not realistic to expect much (if any) growth in full-line in-store sales. By contrast, online and off-price retailers have been capturing bigger and bigger pieces of the retail sales pie.

Nordstrom needs to capitalize on its strong presence in both of these promising markets. For Nordstrom Rack, moderating growth could help get comp sales growth back into positive territory. During 2016, Nordstrom Rack should also benefit from the retail industry's inventory overhang, as it may be able to get great deals on merchandise that other retailers no longer want.

Reasons for optimism
Nordstrom hasn't provided any update on sales trends since its Q3 earnings report. However, we do know for sure that it is better off than Macy's in at least one way: Nordstrom's inventory growth was roughly in line with sales growth during Q3. That means it probably didn't need to resort to margin-killing discounting last quarter.

It's also possible (if not likely) that Nordstrom's sales trend suddenly improved during the fourth quarter, just as it unexpectedly deteriorated a quarter earlier. More broadly, it's important to remember that retail trends can change on a dime. A poor end to 2015 doesn't mean that Nordstrom will have a bad 2016 -- let alone that it is doomed to long-term decline.

Indeed, despite the weak Q3 performance, Nordstrom CFO Mike Koppel forecast in November that EPS growth would accelerate in 2016. Furthermore, Nordstrom's low stock price will allow the company to buy back more shares with the proceeds from its recent credit card portfolio sale. Thus, the recent decline in Nordstrom stock could help sow the seeds for its own future recovery.

Adam Levine-Weinberg owns shares of Macy's, and Nordstrom. The Motley Fool recommends Nordstrom. Try any of our Foolish newsletter services free for 30 days. We Fools may not all hold the same opinions, but we all believe that considering a diverse range of insights makes us better investors. The Motley Fool has a disclosure policy.