Gold loses its luster for a variety of reasons on Tuesday, but could the yellow metal provide a big opportunity for investors in the coming years?

Although gold stocks have been among the 2016's top performers, today was not a great day to be invested in the lustrous yellow metal. At one point today investors were witness to the following:

And shares of these gold miners didn't end the day much off of their lows.

Why gold stocks were throttled
Why did gold stocks get thrown into the smelter on Tuesday? The big issue was the sizable drop in the underlying metal. Gold prices hit an intraday high on Thursday February 11, 2016 of $1,263/oz., its single largest one-day rally in seven years. After retreating a bit on Friday, and U.S. stock markets being closed Monday in observance of President's Day, investors had to readjust to gold trading at $1,200/oz. as of the U.S. stock market close at 4pm ET. This drop in gold prices was enough to send some skittish and short-term investors to the exit.

Another component to today's drop is the optimism being seen in global markets. Gold is often viewed as a hedge trade where investors flock to when uncertainty and red arrows rule supreme. With global markets up decisively following the decision of certain OPEC countries agreeing to freeze their current oil product levels, short-term traders appear to have left the perceived safety of gold in favor of higher growth prospects today.

The last reason gold stocks melted lower probably has to do with profit-taking. As you can see below, most gold miners have had an exceptional start to the year, and some traders may have decided that it was wise to lock in some, or all, of those gains. 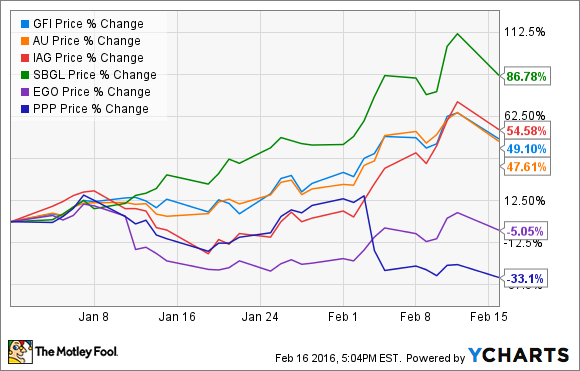 You'll note the two exceptions above – Eldorado and Primero Mining. Eldorado Gold hasn't participated much in the gold price rally due to an announced write down of $1.2 billion to $1.6 billion on the value of its Skouries mine in Greece. The company also lowered its 2016 production guidance to a range of 565,000 – 630,000 ounces from the 723,500 ounces produced in 2015.

As for Primero Mining, its valuation has been hammered in 2016 following word that Mexican tax authorities want to nullify the Advanced Pricing Agreement issued in 2012 to the company's Mexican subsidiary that governs how much the company should pay in taxes. Primero, for its part, believes the request is without merit, but the 33% year-to-date drop in Primero's stock suggests otherwise.

Perhaps the biggest source of excitement has been the rise of the U.S. dollar over the past two years. All four of the aforementioned miners operate in Africa, with three of the four (IAMGOLD being the exception) operating mines in South Africa. The South African rand, in particular, has depreciated substantially over that timeframe as the dollar has risen, and it's helped expand margins and profits for miners operating in South Africa.

Talk of negative interest rate policies for developed countries may prove to be another catalyst for gold miners. The enemy of gold stocks is usually certainty and high yields (since physical gold doesn't pay a dividend). If central banks around the globe begin adopting negative lending rates, it may encourage investment in gold as it would imply global uncertainty (thus the aforementioned flight to safety), and investors would have few avenues left to obtain a solid investment yield.

But, most importantly, we're seeing fundamental progress almost across the board for African miners.

Long story short, we have production growth, falling AISC, which in many cases is well below the current spot price per ounce for gold, and currencies are cooperating in favor of African miners. These miners will still need these factors to continue to play out in their favor, but it's quite possible that the run in gold stocks may just be getting started.