A surprise quarterly loss mixed with lower-than-expected guidance cause shares to plunge.

What: Investors in Community Health Systems (CYH -7.03%) are having a rough start to the trading week as shares of the hospital provider are down more than 30% as of 11:30 a.m. ET after the company reported a surprise loss during the fourth quarter.

So what: Community Health Systems reported revenue for the period of $4.79 billion, which was down 2.4% when compared to the same time last year and far below the $5.06 billion that Wall Street expected. The bottom-line results were even worse as the company reported an adjusted net loss of $0.28 per share for the period. Analysts expected a profit of $0.95 for the quarter, so this was an enormous miss that really took the market by surprise.

Guidance for the coming year was also weaker than many had predicted. The management team is forecasting that revenue will come in between $20 billion to $20.6 billion, which translates into earnings per share of $3.40 to $3.80, both below what the market was looking for.

Now what: The surprise quarterly loss mixed with its tepid guidance for 2016 have traders dumping other hospital stocks today as well. For example, shares of Tenet Healthcare (THC -1.36%), a Texas-based hospital operator, are down more than 9% today, even though it isn't scheduled to report results until next week.

Community Health Systems CEO Wayne T. Smith had this to say about the quarter:

The results for the fourth quarter of 2015 were affected by a number of factors, including volume weakness compared with a strong fourth quarter a year ago when we experienced higher emergency room visits and admissions attributed to respiratory illness and the flu.

He also noted that the company recorded a $169 million increase in its allowance for doubtful accounts during the period, which was a major drag on its earnings.

Shares of Tenet Healthcare and Community Health Systems have been absolutely mauled over the last few months. Both stocks have plunged more than 64% since reaching their peak last summer. 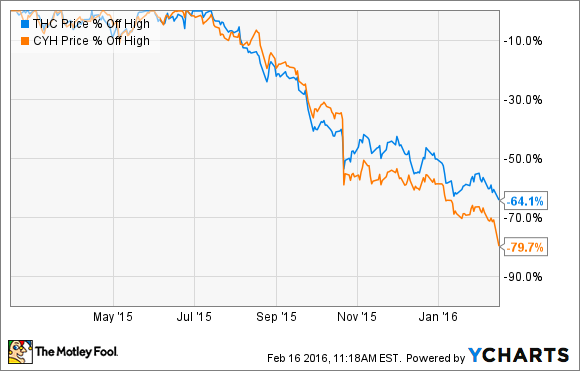 The huge sell-off indicates that investors have lost faith in Community Health Systems' ability to deliver on its promises, which makes sense given that it has come up short of its earnings expectations two quarters in a row. Investors have hit shares so hard that they are currently trading hands for roughly four times expected 2016 earnings.

If the company is able to meet or exceed its guidance, then today's price could prove to be a great buying opportunity. However, until we see tangible signs that it can right the ship, I'm content to watch this stock from the sidelines.