Please ensure Javascript is enabled for purposes of website accessibility
Log In Help Join The Motley Fool
Free Article Join Over 1 Million Premium Members And Get More In-Depth Stock Guidance and Research
By Timothy Green - Feb 16, 2016 at 10:58AM

The cloud-based provider of customer engagement solutions added to its share buyback authorization, regaining some lost ground after a disappointing earnings report.

What: Shares of LivePerson (LPSN -21.85%) jumped on Tuesday after the company announced that it had increased the size of its share repurchase authorization. At 11 a.m. ET, the stock was up about 10%.

So what: LivePerson said it was adding $14 million to its existing share buyback program, which was originally announced in Dec. 2012. That program began with $50 million authorized for buybacks, and LivePerson has used most of that over the past few years. Including the additional $14 million, it now has $20 million available to repurchase shares, with the program set to expire at the end of 2016.

This announcement comes less than a week after its fourth-quarter results were released. The numbers were mixed, but guidance that came in well below analyst expectations sent the stock tumbling. Over the past year, shares of LivePerson are down about 60%, including Tuesday's gains. 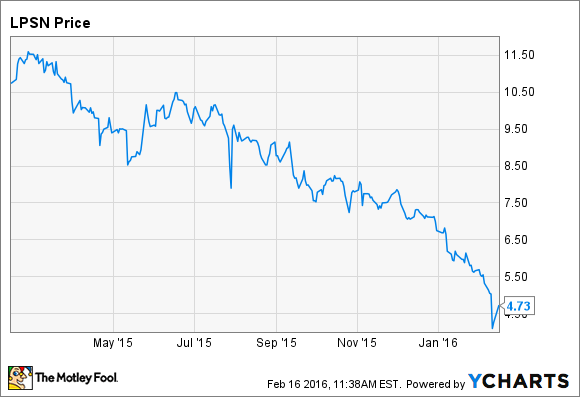 Now what: One thing to note is that a significant portion of this buyback will go toward counteracting the dilution caused by stock-based compensation. At the current market capitalization, $20 million represents about 7.7% of the company's outstanding shares, but the actual reduction in shares will be substantially lower.

For 2016, LivePerson expects revenue between $230 million and $235 million, a decline compared to the $239 million of revenue the company reported for 2015. This makes the buyback announcement seem like an attempt to put out some good news in a sea of bad news, and it seems to have given the stock a boost. In the long run, LivePerson will need to show investors that it can return to growth, as buybacks will do no good if revenue continues to decline.

Timothy Green has no position in any stocks mentioned. The Motley Fool recommends LivePerson. Try any of our Foolish newsletter services free for 30 days. We Fools may not all hold the same opinions, but we all believe that considering a diverse range of insights makes us better investors. The Motley Fool has a disclosure policy.