Let's take a closer look at what Yandex accomplished this quarter: 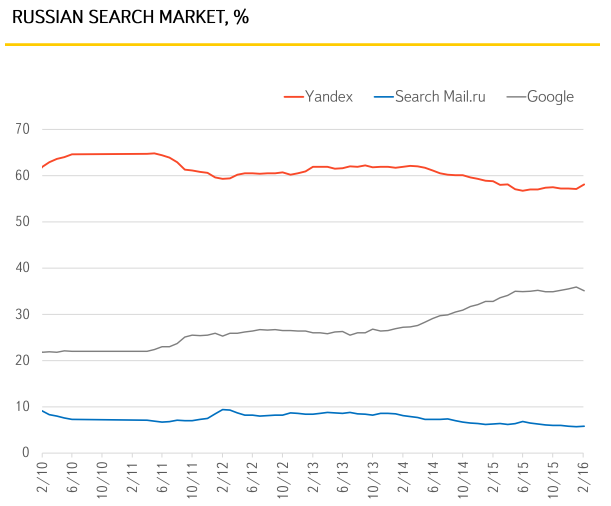 What management had to say
Yandex chief operating officer Alexander Shulgin added, "Q4 was an excellent quarter in which we delivered strong top line growth at 23% year-over-year and served a record number of advertisers. We continued to broaden our business beyond search with the creation of three new business units -- Yandex.Taxi, Auto.ru, and Yandex.Market -- in which we will invest aggressively to accelerate growth in 2016."

Looking forward
With Volozh offering the caveat that "2016 is likely to be another year of high uncertainty with potential further currency fluctuation, continued economic pressures, and highly charged geopolitical backdrop," Yandex anticipates ruble-based revenue in 2016 to grow 12% to 18% over 2015. That translates to a range of roughly 67 billion RUR to 70.6 billion RUR.

But it's also hard to blame Yandex management for their caution in issuing such a wide guidance range. In the meantime, however, investor's can't ask much more of Yandex than growing its number of advertisers to company-record levels, stabilizing market share, and even gaining ground against Google in today's difficult operating environment.

Suzanne Frey, an executive at Alphabet, is a member of The Motley Fool's board of directors. Steve Symington has no position in any stocks mentioned. The Motley Fool owns shares of and recommends Alphabet (A shares) and Alphabet (C shares). The Motley Fool recommends Yandex. Try any of our Foolish newsletter services free for 30 days. We Fools may not all hold the same opinions, but we all believe that considering a diverse range of insights makes us better investors. The Motley Fool has a disclosure policy.