After a rough couple of years for electric utility NRG Energy, there are reasons to believe a turnaround is coming.

Shares of NRG Energy (NRG 2.28%) have been hammered over the past two years, in large part because of a decline in wholesale energy markets and a messy transition to renewable energy. But there may still be hope for the company. 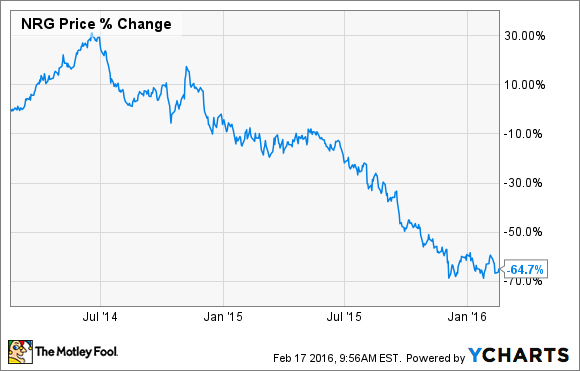 The pricing environment may be improving
One of the challenges wholesale power producers have faced in recent years is a weak pricing environment, too much generating capacity, and weak demand growth led to lower prices and low margins.

But the shutdown of some coal and nuclear plants across the country has eased some of the pricing pressure, and capacity prices are on the rise, as you can see in the chart below. Management is very bullish on the future of wholesale power, and with a large infrastructure of natural gas plants, it's well positioned if pricing improves. 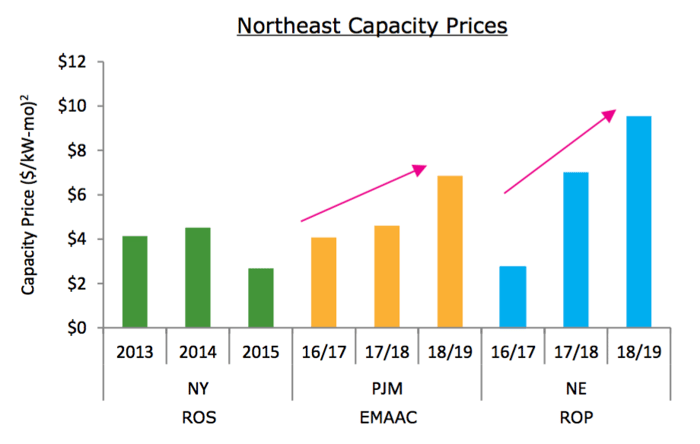 Cost reductions are key for a turnaround
The tough operating environment lately has driven NRG Energy to cut costs, and that could help drive earnings growth in 2016.

Management expects to cut operating costs by $100 million in 2016 and that should flow directly to the bottom line. EBITDA is still expected to fall from $3.35 billion in 2015 to the $3 billion to $3.2 billion range in 2016, but that'll partly be due to asset sales, and the capital expenditures needed to get its residential solar business off the ground.

The company also recently start a cost-cutting initiative in its general and administrative, development and marketing departments that is aiming to reduce expenses by another $150 million by 2018. Again, this would flow directly to the bottom line.

If NRG Energy is able to cut costs, in combination with higher pricing, we could see a rise in margins and profitability in 2016. That would be welcome news for investors.

GreenCo IPO
One of the thorns in the side of NRG Energy over the past couple of years has been its effort to build a renewable energy business, something that utility customers haven't fully understood. The company acquired a rooftop solar company, a consumer solar products company, and even began building an EV charging network. These types of efforts typically cost a lot of money and usually incur upfront losses, just based on the accounting, even if they're profitable over the life of a project.

The type of investors who have traditionally bought NRG Energy didn't like the impact the focus on renewable energy was having on the company, and management decided late last year to create a separate "GreenCo" to own these projects. The new company will be given a $125 million runway to get it going, but the real goal is to eventually spin it off with an IPO.

If market conditions improve in 2016 and the GreenCo proves it has a viable long-term business model, spinning off those assets could be a boost to NRG Energy. That's a big "if," but it could also be the company's biggest upside catalyst.

Is the worst over?
NRG Energy still provides valuable energy to customers and utility partners, and I think the drop in the stock is overdone. NRG will eventually split into a "dirty" company and a "clean" company, making it much easier to analyze its performance. While it was trying to do both, it confused investors. That will likely end in 2016, which I think is the biggest reason the stock will have a good year.

Travis Hoium has no position in any stocks mentioned. The Motley Fool owns shares of NRG Energy,. Try any of our Foolish newsletter services free for 30 days. We Fools may not all hold the same opinions, but we all believe that considering a diverse range of insights makes us better investors. The Motley Fool has a disclosure policy.