Carter's (NYSE:CRI) is set to release fourth-quarter 2015 results after the market close on Thursday, February 25, 2016. And though shares of the children's clothing retailer are little changed since it announced solid third-quarter results just more than three months ago, investors can take solace knowing Carter's has held relatively steady, even as the broader market suffered steep declines during the same period. 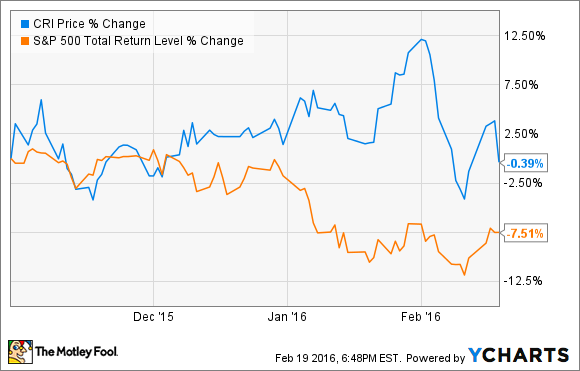 What should we expect to hear when Carter's report hits the wires?

The headline numbers
Last quarter marked Carter's ninth-consecutive quarterly-earnings beat relative to its own guidance. So don't be surprised if it once again over delivers on the bottom line.

Carter's latest guidance calls for fourth-quarter revenue to decline 2% year over year, to $852 million, which should translate to adjusted earnings per diluted share of $1.22 to $1.30, down from $1.32 in last year's fourth quarter. That may not sound impressive, but management already chalked up the declines to a combination of calendar alignment differences between Carter's and its wholesale customers, as well as the fact that fiscal 2014 benefited from an extra week in the year.

Assuming Carter's lives up to its fourth-quarter expectations, revenue for all of 2015 will have increased 4%, while adjusted earnings per share should be 13% to 15% higher than Carter's achieved in 2014. Carter's owes the disparity between its modest top-line growth and more impressive bottom-line gains to a combination of disciplined expense management, broad market distribution, and strategic share repurchases.

For an idea of the typical mix of business, last quarter, Carter's retail segment revenue climbed 4.8%, to $294.9 million, or roughly 34.5% of total revenue, driven by new locations and 6.2% growth in e-commerce revenue, and held back by a 3.2% decline in direct-to-consumer retail comparable sales. Carter's wholesale segment revenue rose 10.9%, to $343.6 million, or 40.2% of revenue, driven mostly by strong product demand.

Meanwhile, the OshKosh retail segment revenue climbed 7.5%, to $98.3 million, driven by 14.1% growth in e-commerce, and held back by a 5.4% drop in DTC comps. In particular, Carter's management noted OshKosh suffered last quarter as the strong dollar deterred sales to international tourists at both its retail and e-commerce channels. Finally, OshKosh wholesale revenue declined 25.1%, to $18.8 million, thanks to lower seasonal bookings, and lower sales to off-price channel customers.

In addition, Carter's domestic business still generates the bulk of sales. International revenue climbed 3.4% -- but would have risen 17.3% at constant currency -- thanks to strong demand in Canada, and from Carter's recently formed e-commerce business on China's Tmall platform.

On guidance
With nearly two months of the new year now under its belt, Carter's will also likely offer more specific guidance for the current quarter and full-year 2016.

In particular, Carter's only just finished the rollout of its new "Rewarding Moments" loyalty program in early October, after which it saw more than 1 million customers sign up in the first 10 days. Given its early strength, Carter's management revealed during last quarter's conference call that they expect the new program could drive more than $30 million in incremental sales in 2016.

On top of that, Carter's recently extended its product offering to include size eight clothing. Based on strong demand this fall, it increased orders for the new size in anticipation of the impending spring season. Assuming all goes as planned, this expansion is expected to generate another $30 million in 2016 sales.

There's also the impact of Carter's steady growth in new retail and wholesale locations for each brand. This includes plans to open 250 additional stores during the next five years in its well-received "side-by-side" format, which features the most popular products from both Carter's and OshKosh in a single location.

Analysts' consensus estimates call for Carter's 2016 revenue to increase slightly more than 6%, to $3.19 billion, while 2016 earnings are expected to roughly sustain this year's 14% growth, to arrive at $5.12 per share. Not living up to those expectations wouldn't be the end of the world for Carter's; but in the end, given the company's history of outperformance, disciplined expense management, and reasonable initiatives to generate sustained growth, I would be very surprised next week if the company gives patient investors any excuse to sell their shares in the near future.