NVIDIA (NASDAQ:NVDA) reported earnings on Wednesday night, covering the fourth quarter of fiscal year 2016. Shares rose as much as 12% on the news, as investors welcomed a strong revenue performance with open arms.

What happened with NVIDIA this quarter?
Every business segment delivered positive sales growth year over year, but some divisions shone brighter than others. 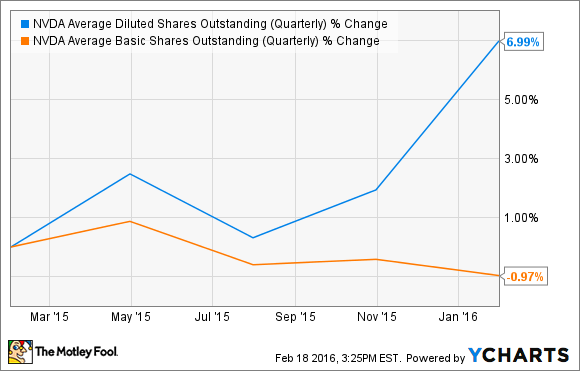 Looking ahead, management offered what they call a "prudent" guidance framework for the coming quarter.

What management had to say
Those guidance figures were based on a firmly optimistic market view. According to CFO Colette Kress:

We remain excited about our business prospects. Gaming remains strong and eSports, VR, and new exciting games will lift it further. Graphics processor-accelerated datacenters are expanding in both high-performance computing and cloud, driven by the growth of deep learning. And autonomous driving continues to move forward. We have excellent positions in each of these growth markets.

Looking ahead
As it turns out, NVIDIA's number-crunching graphics products also turn out to be very good at the kind of math you need for big supercomputing projects and artificial intelligence efforts, which places the company firmly in the crosshairs of car manufacturers and Big Data collectors.

If NVIDIA can hang on to this enviable position, the company looks poised to benefit greatly from the self-driving car phenomenon, with a side of data-crunching for the Internet of Things. This will require constant innovation and crisp management execution, and nothing is set in stone. But this quarter gave investors a whiff of what that potential future could smell like.