What a sight for sore eyes! It's been some time since investors have witnessed the Dow Jones Industrial Average and S&P 500 trading 4.6% and 4.8% higher for the week, respectively.

There was quite a bit of economic data for investors to digest over the course of this week. On Wednesday, it was reported that industrial production rose 0.9% in January, which was the first increase since July and far above estimates. The rest of the economic data was a bag of mixed results, with the consumer price index remaining unchanged in January, which was better than the slight decline that was expected. Housing starts were also off 3.8% last month, but initial unemployment claims fell more than expected to 262,000.

But enough of dreary data: In honor of a rare great week for the markets this year, let's look at some of this week's biggest winners. 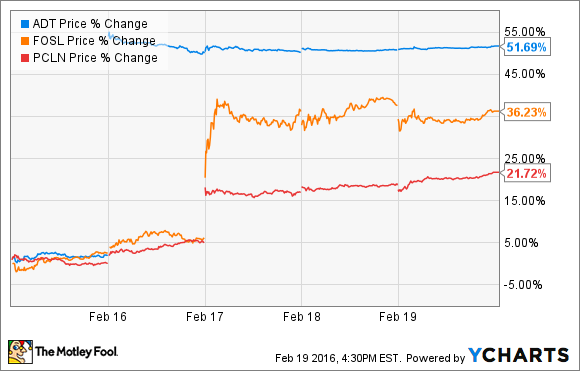 Acquisition time
The ADT Corporation (NYSE: ADT), a provider of home and business security systems for roughly 6.5 million consumers, announced early in the week it would be acquired by private equity firm Apollo Global Management for $6.9 billion. If you're keeping track, that's the largest leveraged buyout in 2016 so far.

It's an intriguing move, as the private equity firm already owns Protection 1 and ASG Security, two separate security companies. The plan is to combine the three businesses under the ADT name. The agreement called for a $42 per share offer in an all-cash transaction, a roughly 56% premium to ADT's Feb. 12 closing price. That helped send the stock price soaring, along with the fact that many shares outstanding were sold short, which likely caused a short-squeeze as positions were closed.

In my opinion, it's likely a good move to try and offset the competition ADT is increasingly facing as many large telecom and cable providers have begun offering similar home security services. Combining ADT with Apollo's other security businesses will give the combined company a better chance against the new competition, though the combined entity will still have a difficult time organically growing its earnings and cash flow.

Priceline soars
Shares of The Priceline Group (NASDAQ:BKNG) couldn't match ADT's jump in price, but the travel services company was no slouch this week, either. Priceline's stock moved 20% higher after it announced strong fourth-quarter results, and noted that momentum had carried over into the first quarter of 2016.

The company's fourth-quarter gross travel bookings -- a figure that refers to the total dollar value, generally inclusive of taxes and fees, of all services purchased by consumers net of cancellations -- checked in at $12.0 billion. That was a 13% increase over a year ago, and on a constant currency basis it was approximately 24% higher.

Priceline's gross profit for the fourth quarter was $1.9 billion, a 12% increase from the prior year's fourth quarter. Adjusted for special items, its fourth-quarter net income was a strong $12.63 per share, which was favorable compared to consensus estimates of $11.80.

Lastly, the company noted that the momentum has so far carried into the first quarter, as it's seeing room-night growth of 20% to 27%, and with total booking growth forecast to increase by between 18% and 25%, the latter is on a constant currency basis.

Fossil Group surprises but...
While Fossil Group (NASDAQ:FOSL) managed to thump estimates during its fourth-quarter earnings report, which sent its stock soaring roughly 26% at the time, investors should also note that expectations were pretty low.

The fashion company posted fourth-quarter revenue of $992.5 million which beat estimates by roughly $70 million, however it was still a year-over-year decline of almost 7%. Most of that decline was blamed on the strong dollar, which had a negative impact on Fossil's revenue during the fourth quarter -- factoring out the currency headwinds, revenue declined by "only" 2%, compared to the prior quarter.

The Fossil Group's GAAP earnings checked in at $1.46 per share, which was a decline from $3 per share during the prior fourth quarter, but still $0.16 higher than analysts' estimates. Despite the fourth-quarter beat, Fossil still expects sales to decrease between 7% and 10% for the first quarter of 2016. Essentially, it wasn't a great quarter, and arguably not even a good quarter, but estimates were so low it provided a spark to the stock price. 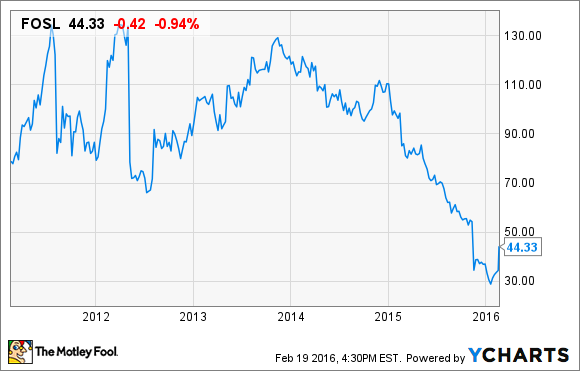 Despite the spike in Fossil's price this week, if you look at the long-term view it's still been an absolutely brutal handful of years for the company.