With interest rates remaining low, issuing debt to buy back stock is almost a no-brainer for Apple.

In the past few years, Apple (AAPL -0.14%) has issued more than $60 billion of debt to fund its dividends and share repurchases. This has allowed it to avoid paying repatriation taxes of up to 35% on its $200 billion foreign cash stockpile.

On the company's Q1 earnings call last month, Apple CFO Luca Maestri stated, "We also plan to be very active in the US and international debt markets in 2016, in order to fund our capital return activities." Apple made its first move in this direction in the past week.

Of the new debt, $10.5 billion is being raised for "general corporate purposes" -- which means share buybacks, for all intents and purposes. However, Apple is also issuing $1.5 billion in "green bonds" that are earmarked for investments in energy efficiency, renewable energy, and similar initiatives.

As a practical matter, the distinction between Apple's green bonds and its debt raised for general corporate purposes is probably moot. Apple was going to spend money on environmentally friendly projects no matter what. Issuing green bonds will free up the cash it would have otherwise spent on these projects.

In fact, Apple typically saves money when issuing debt to buy back stock, because the added interest expense is more than offset by lower dividend payments. Apple priced its recent offering at an average interest rate of less than 3%. (Even its 30-year notes carry an interest rate of just 4.65%.) After the impact of tax savings, the effective interest rate will be less than 2%.

For comparison, Apple's dividend yield was 2.2%, based on its Thursday closing stock price of $96.26. Furthermore, Apple is likely to raise its dividend in April, increasing the amount of cash that it will save by buying back stock now.

Apple stock is cheap
Of course, it wouldn't make sense for Apple to spend money on share buybacks if its stock was overvalued. However, Apple stock is quite cheap, having fallen back below $100 last month. 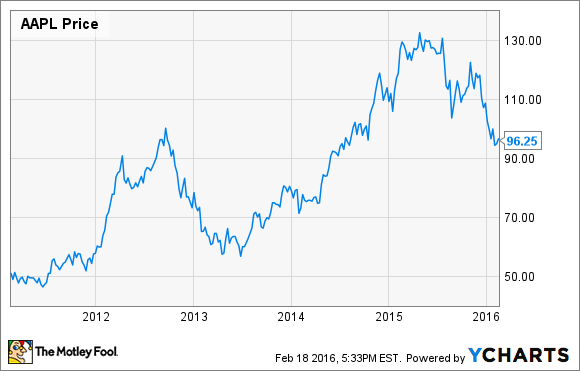 It's true that Apple's profit could decline on a year-over-year basis in fiscal 2016. However, the expected launch of a new 4-inch iPhone (the iPhone 5se) and an updated 9.7-inch iPad (the iPad Air 3) should keep any earnings decline manageable. Meanwhile, the stock now trades for less than 11 times the average analyst estimate for this year's earnings: far below the average earnings multiple for the stock market as a whole.

Most importantly, Apple is well positioned to return to solid profit growth next year. The iPhone 7 should ignite another strong upgrade cycle for Apple's signature product. Apple CEO Tim Cook also expects the iPad product line to make its long-awaited return to revenue growth later this year. Finally, a much-improved Apple Watch is likely to be ready for launch by this fall.

A return to stronger earnings results should lead to a revival in Apple's stock price. In the meantime, issuing debt at rock-bottom interest rates to buy back more stock will build value for long-term investors.