Please ensure Javascript is enabled for purposes of website accessibility
Log In Help Join The Motley Fool
Free Article Join Over 1 Million Premium Members And Get More In-Depth Stock Guidance and Research
By Brian Feroldi - Feb 21, 2016 at 9:04AM

Which of these two large cap biotechs is the better choice for new money today?

Gilead Sciences (GILD 0.89%) and Amgen (AMGN 0.93%) have both been stellar investments for their long-term shareholders. Each has put up returns that have utterly smashed the S&P 500 over the past five, 10, and 20 years. But which of these two biotech giants is the better bet for investors who want to jump in today?

Let's compare these two companies side by side to see if we can ascertain an answer.

Size
With market capitalizations that current exceed $100 billion, both of these companies have grown to become industry giants. Amgen's massive size is owed to the huge success of a handful of blockbuster drugs, such as its rheumatoid arthritis treatment Enbrel and its white blood cell-boosting drug Neulasta. These drugs played a big part in allowing the company to generate more than $21 billion in sales worldwide in 2015.

Gilead Sciences has also grown into the behemoth it is today thanks to its strong HIV franchise that counts blockbuster drugs such as Truvada, Atripla, and Stribild. More recently, it has become known as a major player in the hepatitis C market thanks to its blockbuster drugs Harvoni and Sovaldi. Gilead Sciences rang up more than $32 billion in worldwide sales in 2015, which has turned it into the largest biotechnology stock on the markets today.

Both companies are relatively safe ways to play biotech, as their diverse product portfolios and broad pipelines prevent a single point of failure.

Growth
Amgen has done a great job over the past few years at building out its portfolio of products. Strong growth in newer drugs such as multiple myeloma treatment Kyprolis and hyperparathyroidism therapy Sensipar/Mimpara have helped offset declines in the company's more mature drugs. In total, the company has grown its profits by a strong 17% annualized rate over the past five years.

By comparison, Gilead's recent growth rates have been nothing short of jaw-dropping. Thanks to the incredible success of its hepatitis C treatments Harvoni and Sovaldi, the company grew its adjusted earnings per share from $3.69 in 2010 to an astounding $12.61 in 2015.

Of course, trailing growth is one thing, but investors interested in purchasing shares of either company today should concern themselves with future growth rates. Analysts are currently projecting that incoming competition in the hepatitis C space will have a huge effect on Gilead's growth prospects, and they are predicting modest growth on slightly more than 5% over the coming five years. Analysts are feeling a little bit more bullish about Amgen's near-term prospects are are expecting the company to grow its profits roughly 8% per year.

Yield
It might surprise you to learn that both Gilead and Amgen have quietly become income investments over the past few years. Amgen turned on the dividend spigot back in 2011 and has been meaningfully increasing its dividend payout ever since. With its current payout of $1 per quarter, its shares offer up a tempting yield of 2.76% right now.

Gilead only recently started offering a cash payment to its shareholders, having initiated its first dividend payment in 2015, so investors don't have as long of a track record to point to. That hasn't stopped the company from showing that it's committed to its dividend. In fact, it recently announces that it will increase its payout by 10% to $0.47 per quarter. That gives its shares a respectable yield of 1.92% at the moment.

Valuation
The recent market volatility has caused biotech valuations to compress greatly, which has taken its toll on both of these stocks. Amgen and Gilead are each down considerably from their summertime highs. 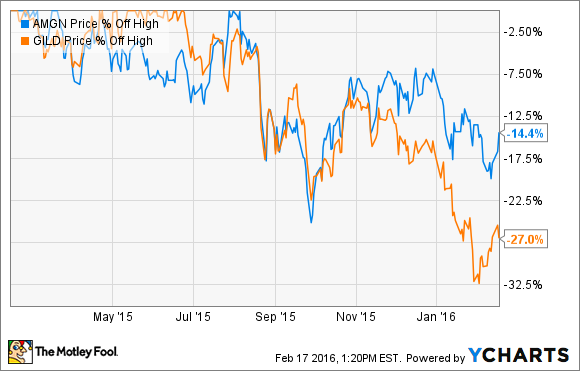 With trailing P/E ratios of 16.5 and 7.4, respectively, both Amgen and Gilead Sciences are trading at considerable discounts to the S&P 500 in general, which currently sports a trailing P/E ratio above 20. The differences are even greater when you look out to next year's earnings estimates.

No matter how you look at it, both of these companies are trading at sizable discounts to the market right now, which could indicate that both of their stocks are cheap at the moment.

Which is the better buy today?
While I think investors could purchase shares in either of these companies today and do just fine over the long term, I can't help giving Gilead Sciences the edge right now. With shares trading for less than 8 times earnings, the market isn't pricing this company for much growth at all, so if the company can surprise on the upside -- which it has a strong history of doing -- then I could easily see this stock being a great investment from here.