Brick-and-mortar and e-commerce duke it out in a battle of value and growth.

With shares of e-commerce giant Amazon.com (AMZN -1.24%) and retailer and grocer Wal-Mart (WMT 0.80%) moving in opposite directions during 2016, it's a good time to compare the two stocks head-to-head. 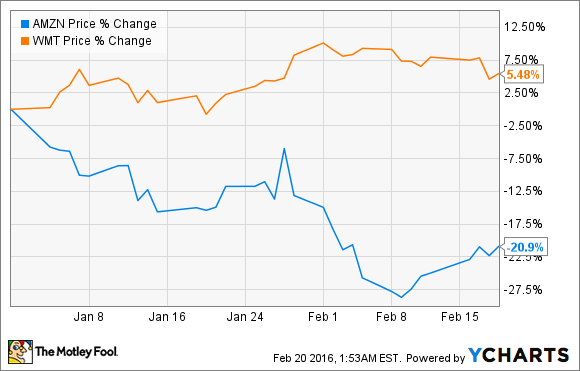 Amazon stock was hit hard during an early 2016 market sell-off. While the S&P 500 is only down 6% year to date, many growth companies such as Amazon saw their shares get hit harder than the overall market as investors opted to exercise more caution toward premium valuations assigned to fast-growing companies like Amazon. Shares of the e-commerce giant are down 21% year to date.

A comparison of the two companies ultimately comes down to a battle of value and growth. In this case, which bet looks better? Let's find out.

But the brick-and-mortar retailer is facing some challenges when it comes to growing its business. During Wal-Mart's fiscal 2016, the company's revenue declined 0.7%. The decline was attributable primarily to currency headwinds and store closings. Adjusting for currency headwinds, revenue increased 2.8%. Going forward, the sales outlook is even more bleak; the company recently slashed its outlook for fiscal 2017 revenue growth from 3% to 4% to expectations for net sales to be "relatively flat."

Amazon.com
Amazon stands out as the fast growing company of the two. Sales were up 20% in 2015, easily trumping Wal-Mart's inability to grow its top line. And with Amazon management guiding for 17% to 28% year-over-year revenue growth for the current quarter, the company clearly isn't expecting a deceleration anytime soon.

Beyond growing its top line, Amazon is also recently demonstrating to investors it can beef up its free cash flow. Free cash flow in 2015 was $7.3 billion, up from $2 billion in the year-ago quarter. EPS also jumped from $0.52 to $1.25 -- still small but a move in the right direction.

When it comes to valuation, the market clearly doesn't expect as much from Wal-Mart as it does from Amazon. Wal-Mart's smaller market cap of $203 billion versus Amazon's of $248 billion despite the fact that Wal-Mart's $15.9 billion in free cash flow more than doubles Amazon's $7.3 billion highlights how Amazon is priced for more growth. And a comparison of the two companies price-to-sales ratios -- Wal-Mart at 0.4 and Amazon at 2.4 -- really drives home the contrasting expectations the market has for the two companies.

Reviewing these two stocks' current situations, investors ultimately have an opportunity to either buy into a business that could very well be facing decline if Wal-Mart management doesn't successfully find new growth opportunities, or buy into a business positioned to grow at a meaningful rate for a very long time. While Amazon stock doesn't come cheap, its growth potential compared to Wal-Mart's uncertain future may justify the e-commerce giant's pricey valuation -- particularly after a 21% year-to-date sell-off.

Daniel Sparks has no position in any stocks mentioned. The Motley Fool owns shares of and recommends Amazon.com. Try any of our Foolish newsletter services free for 30 days. We Fools may not all hold the same opinions, but we all believe that considering a diverse range of insights makes us better investors. The Motley Fool has a disclosure policy.