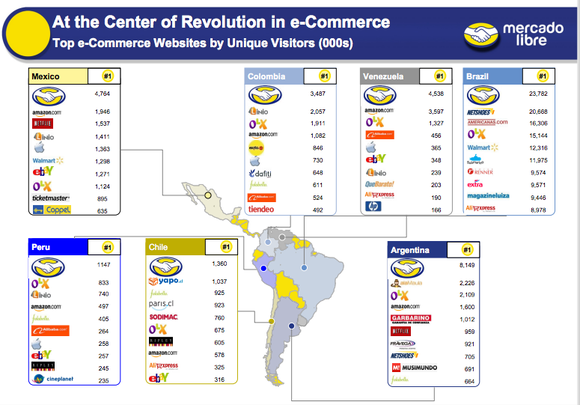 The rise of e-commerce has created new markets around the world, and MercadoLibre (NASDAQ:MELI) has taken Latin America by storm with its online marketplace. The company's business model closely resembles that of U.S. giant eBay (NASDAQ:EBAY), but unlike eBay, MercadoLibre has thus far held onto its peripheral digital-payments and shipping businesses. Coming into Thursday's fourth-quarter financial report, MercadoLibre investors hope that the decision to remain integrated will unlock growth opportunities that eBay has chosen to give up through spinoffs, but MercadoLibre will have to fight through tough conditions in Latin America. Let's take an early look at what you can expect to see in MercadoLibre's report.

Can MercadoLibre earnings start 2016 strong?
In recent months, investors have been just a bit downbeat in their views on MercadoLibre earnings, cutting a penny per share from their fourth-quarter projections and marking down their full-year 2016 estimates by 1%. The stock has given up ground, falling 15% since mid-November.

MercadoLibre's third-quarter report showed results that gave investors more confidence in the e-commerce company's ability to overcome less than ideal economic conditions in its home markets. The company boosted its revenue by 14%, doubling the rate at which investors had expected to see MercadoLibre grow. Earnings growth of 35% resulted from extremely strong performance from MercadoLibre's namesake marketplace business as well as its MercadoPago payment system and its MercadoEnvios shipping service. Efforts to add new brands to its marketplace also bore fruit, and free-financing offers became extremely popular among MercadoLibre customers.

Yet MercadoLibre has even more ambitious plans to wrap its arms around the entire e-commerce opportunity. The company is also working to help add advertising services to its sales platform, and it wants to provide support for back-end e-commerce operations that can make it easier for its clients to handle their online marketplace businesses. By combining those services with payment processing, logistics, and financing, MercadoLibre is looking to remain a one-stop shop for businesses looking to harness the power of e-commerce. That's a direction that eBay largely stepped away from when it spun off its payment-processing network, but MercadoLibre seems to see the advantages of keeping all those operations vertically integrated within a single company.

How fast MercadoLibre can grow depends on the well-being of its customer base, and that in turn depends on the health of economies in the region. Latin America has about double the population of the U.S., but e-commerce makes up a much smaller share of overall retail activity in Latin America than it does domestically. MercadoLibre has to expect that average transaction sizes will typically be smaller given the lower income levels in many of its key markets. However, by offering financing, MercadoLibre can tap into the future earnings potential of its customers and accelerate the growth that would be available without financial leverage. Perhaps most important of all, MercadoLibre doesn't face the same level of competition in the e-commerce industry that eBay does in the U.S., and the Latin American marketplace giant's big lead should give it ample opportunity to make the most of its network effects before rivals can pick up steam.

In the MercadoLibre report, investors should look at the company's underlying numbers to weigh its local-currency growth. If the strength of the U.S. dollar starts to diminish, as we've seen in recent weeks against some major currencies, then MercadoLibre's earnings growth should look a lot more impressive in 2016 and beyond.