Please ensure Javascript is enabled for purposes of website accessibility
Log In Help Join The Motley Fool
Free Article Join Over 1 Million Premium Members And Get More In-Depth Stock Guidance and Research
By Cory Renauer – Feb 21, 2016 at 11:02AM

With Sustol on its third attempt at FDA approval, investors have plenty to worry about.

Last spring, Sustol from Heron Therapeutics (HRTX -4.28%) proved itself capable of reducing chemotherapy-induced nausea and vomiting in a group with limited options. Since the announcement, the stock has been on a epic roller-coaster ride. 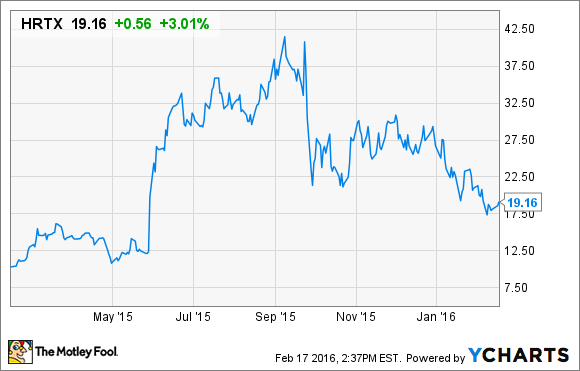 Now on its third attempt at approval, the FDA has delayed its decision on the drug. Initially expected last month, the FDA pushed the announcement until "sometime near the end of February," leaving its investors with a case of regulatory-limbo-induced nausea. Let's take a closer look at what lies ahead for Heron to get a handle on just how risky this stock is.

Strikes one and two
Sustol's first rejection happened back in 2010, when the company was named A.P. Pharma. The FDA brought up a list of issues, not least of which included requests for additional data.

A.P. Pharma dealt with the issues brought up in the first response letter but a few years later received a second rejection. Among other issues, the regulator requested a reanalysis of existing data based on guidelines that didn't exist at the time of the original application. Basically, the FDA wanted data that split patients into two groups based on their chemotherapy's emetogenic level -- a fancy way of saying how badly it makes you vomit.

Do you believe in magic?
Turns out those new guidelines may have helped Sustol find a niche protecting patients against delayed -- versus immediate -- nausea and vomiting in patients receiving highly emetogenic chemotherapy, or HEC. During the previous study, patients receiving what was previously considered HEC showed a 4.7% improved response rate with Sustol as compared with Eisai's Aloxi. Under the new definition of HEC, Sustol-treated patients' response rate was 10.5% higher than those treated with Aloxi.

Here's where things get complicated: Aloxi isn't approved for delayed onset chemotherapy-induced nausea and vomiting in the HEC population, but a three-drug combination including Novartis' Zofran is. This is why Heron Therapeutics ran a head-to-head trial with the ill-conceived acronym MAGIC that pitted Sustol and the other two drugs against the standard of care.

During days two through five following highly emetogenic chemotherapy, 64.7% of patients pre-treated with the Sustol regimen didn't vomit, versus 56.6% in the Zofran-containing arm.

A supersized application
With these figures in hand, Heron submitted a new drug application to the FDA for Sustol. What's worrying, and possibly responsible for the delay in the decision, is the scope of the application. Heron has asked for approval of Sustol for four indications. One is for preventing delayed-onset nausea and vomiting following highly emetogenic chemotherapy -- the subject of the Magic trial. If the data stands up to regulator scrutiny, an approval for this indication seems reasonable.

Back in the days before electronic filing, new drug applications were delivered to the FDA in caravans. The stacks of paper filled rooms from floor to ceiling. If you meet any members of the agency tasked with filtering through this application, buy them a coffee, or give them a hug. I'm sure they could use both.

Beyond approval
Something beginning biotech investors fail to consider is that earning approval is relatively straightforward compared to earning a significant share of an established market. Heron makes its way to investment bank-sponsored healthcare conferences but so far hasn't partnered up with any bigger companies.

That's not necessarily a bad omen, but seeing a bigger player willing to share some of the risk involved in developing and then marketing Sustol would significantly reduce the hazards of Heron stock ownership. The company ended last year with $131 million in cash. It's management's opinion that this is sufficient to keep the company's operations funded through the end of the year, including a potential commercial launch of Sustol. To me, that seems awfully light. 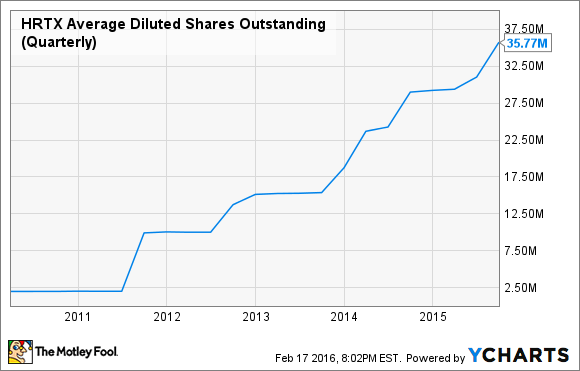 Heron is not at all shy about funding ongoing operations by raising equity. About $500 million is a generous estimate for peak annual Sustol sales. An investor who bought in back when there were fewer than 2.5 million shares outstanding stood to reap some enormous gains if all had gone well on Sustol's first attempt.

At a present market cap of around $700 million, the company is priced well above potential sales. If Sustol wins approval for all four indications, earning a significant share of its addressable market will be extremely challenging. Sure, it showed some benefit over the Zofran regimen, but its active ingredient, ondansetron, has been available in generic form for years. For the three indications not included in the MAGIC trial, it will have generic Aloxi to contend with, when Sandoz is expected to begin marketing its version in September 2018.

In my opinion, a more realistic outlook includes seeing Sustol win approval for the indication outlined in the MAGIC trial only. This occurrence could earn Heron just enough to slowly continue developing several other assets in its pipeline, while diluting shares at a much slower rate.

The long-term gains to shareholders who have bought in at recent prices would be minimal at best. When factoring in the headache, I really don't think it's worth the risk.