For a little while there, it looked like NVIDIA's (NASDAQ:NVDA) Tegra business was on the ropes. After losing a lot of ground in the mobile device market, NVIDIA decided to pivot its Tegra strategy to target the automotive sector. There was a lot of uncertainty surrounding whether or not NVIDIA could pull off such a switch, but the graphics specialist is doing quite nicely in the automotive sector.

Even as Tegra continues to shift away from mobile, the chip is making a comeback.

Back to battle
Shares jumped last week after NVIDIA put up a strong fiscal fourth quarter. The company enjoyed record quarterly revenue of $1.4 billion, up 12% year over year. The core GPU business remains very resilient despite ongoing weakness in the PC market, since NVIDIA targets an enthusiastic niche subset of the market -- gamers.

But the Tegra business was able to grow revenue by 40% to $157 million. To be clear, Tegra is still a modest portion of the company, comprising 11% of total revenue, but NVIDIA has invested heavily in Tegra development over the years. As far as pivots go to (which often fail), Tegra's has been an unqualified success.

After bottoming out in fiscal Q2 2014, Tegra revenue has recovered and mostly stabilized, thanks largely to the company's design wins in the automotive sector. 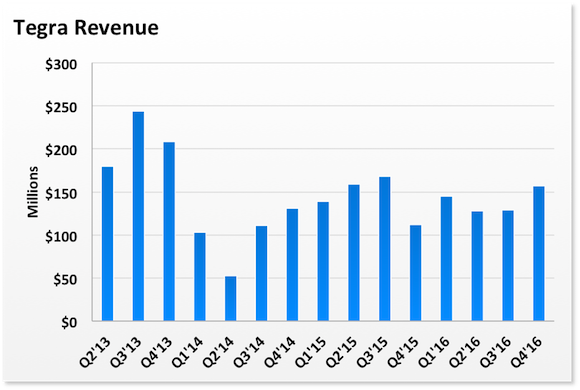 Last quarter's automotive revenue jumped to $93 million. In terms of trailing-12-month revenue, we're talking about $320 million coming from cars, comprising nearly 60% of Tegra revenue over the past four quarters. This is particularly impressive considering the fact that the auto market is characterized by substantially lower unit volumes than the mobile device market. But then again, NVIDIA was never able to grab a huge piece of the mobile market, which it is decidedly doing in autos.

There's more where that came from
Tesla Motors (NASDAQ:TSLA) has been one of the more important partnerships for NVIDIA, since the Model S is far more computerized than other cars. Tesla's flagship sedan uses a Tegra 2 chip in the instrument cluster, as well as a Tegra 3 in the primary center console head unit. The Model X also uses Tegra chips, but it's unclear which chips the electric SUV has inside. It's quite possible that Model X uses NVIDIA's Drive PX platform, which implements two Tegra X1 processors and delivers 2.3 teraflops of computing power.

The partners that we worked with, the car companies we worked with, to computerize their cars, whether it is Audi or Tesla, whose cars are heavily computerized. Their growth prospects in the coming years are quite good. So I think that's one. We have a clear view of the pipeline, and I think the megatrends of the computerization of cars is in our favor.