Please ensure Javascript is enabled for purposes of website accessibility
Log In Help Join The Motley Fool
Free Article Join Over 1 Million Premium Members And Get More In-Depth Stock Guidance and Research
By Jeremy Bowman – Feb 21, 2016 at 8:13AM

Cage-free eggs could be a boon for egg producers. Here's one stock that's uniquely positioned to benefit.

Trader Joe's announced this week that it would go cage-free by 2025, and by 2020 in some states. The alternative grocer said that 60% of the eggs it sells are cage-free already, and believes demand for cage-free eggs is evolving faster than supply.

With that announcement, Trader Joe's joins Costco Wholesale (COST -1.40%), McDonald's Corp. (MCD -1.56%), Nestle, Wendy's, Starbucks, Panera Bread, General Mills, Subway, and others that have all committed to selling only cage-free eggs. As consumers become more concerned about animal rights and where their food is coming from, the movement has reached a critical mass.

McDonald's and Costco would seem to have the biggest effect on the trend among all the companies listed above.  With 14,000 locations nationwide, Mickey D's is one of the country's biggest purchaser of eggs, buying 2 billion annually. Under new CEO Steve Easterbrook, the company has made food transparency and quality a priority, committing to antibiotic-free chicken as well as cage-free eggs. Meanwhile, Costco, the country's second-biggest retailer, finally responded to calls for it to commit to cage-free eggs. The warehouse retailer has not set a date for the transition, but groceries make up 57% of its sales, or more than $60 billion last year, meaning its decision is likely to further tip the scales to cage-free and could influence other grocery chains.

But the biggest beneficiary from this trend is not a retailer or restaurant but a supplier.

And the winner is...
Cal-Maine Foods (CALM -5.25%) is the nation's largest producer and marketer of shell eggs. In fiscal 2015, it sold over 12 billion eggs, or an estimated 23% of the domestic market. The company has grown to a dominant position in the market thanks to a series of acquisitions.

Cal-Maine sells to a wide variety of businesses, including national and regional grocery stores, club stores, and restaurant chains. It sells shell eggs to a majority of the largest food retailers in the U.S, and is also a major producer and distributor of specialty eggs. Specialty shell eggs bring in about 60% more revenue per egg, and made up nearly 20% of total egg volume in its most recent year.

In other words, doubling the percentage of specialty eggs it sells would lead to a 12% increase in revenue and a greater increase in profits from the premium-priced product. Cage-free eggs command a premium as much as double that of regular eggs. If the whole industry goes cage-free, revenue could jump between 50% and 80%.

Going cage-free won't happen overnight
Most of the big brands that have made their cage-free announcements have given themselves as much as 10 years or more to transition. From a business sense, caged hens have their advantages. Caged henhouses can hold as many as one to two thirds more birds, and caging helped turned a niche industry populated by small businesses into a global commodity with price points that made eggs a staple food.

Going cage-free on a scale big enough to satisfy McDonald's, which buys 2 billion eggs a year for its U.S. restaurants, will require billions in investments from farmers as well as a much larger hen population, since cage-free hens don't lay as much. Currently, 8% of the national flock is cage-free.

Cal-Maine has already gotten started on filling the upcoming demand. Last year, it announced it was teaming up with Rose Acre Farms, the country's #2 egg supplier, to build a cage-free facility that would house 1.8 million to 2.9 million hens, which would increase the cage-free population by about 10%.

More to like about Cal-Maine
Cal-Maine has a history of growing through acquisitions, having bought 18 companies since 1989, and is now focused on buying specialty egg producers as specialty eggs are the major driver of growth. As the company is already the largest egg producer in the U.S., its advantage is only likely to increase as it further consolidates its leadership position. In addition, the company is benefiting from other trends in the food industry like a decline in packaged and processed food consumption. Breakfast cereal, one competitor with eggs, is on the decline, and the trend of making food from scratch, rather than out of the box, also favors egg sales.

In addition, Cal-Maine delivers strong profit margins and a dividend yield above 6%, and its stock has been a historically strong performer. As the chart below shows, the stock is up more than 1,000% in the last ten years. 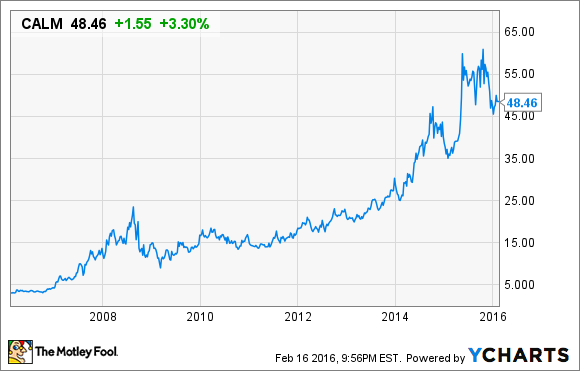 Eggs have long been considered an inelastic good, meaning consumers' decisions to purchase them are mostly unaffected by price. Now Americans are saying they're willing to pay more for cage-free eggs, and businesses are responding. That should lead to a windfall for egg suppliers

With its leading position in the industry, track record of acquisitions, and commitment to meeting cage-free egg demand, Cal-Maine is uniquely positioned to benefit from this trend.

Jeremy Bowman has no position in any stocks mentioned. The Motley Fool owns shares of and recommends Costco Wholesale, Panera Bread, and Starbucks. Try any of our Foolish newsletter services free for 30 days. We Fools may not all hold the same opinions, but we all believe that considering a diverse range of insights makes us better investors. The Motley Fool has a disclosure policy.