Alternative grocery stocks have hit a wall lately. As mainstream grocers such as Kroger (NYSE:KR), Costco, and Wal-Mart have rolled out more organic offerings, the niche players have tumbled. 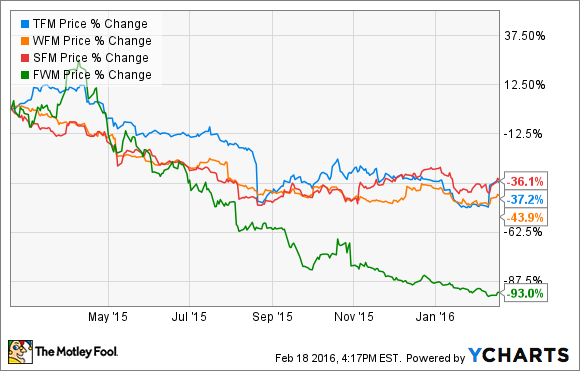 Against that backdrop, it's not surprising that The Fresh Market (NASDAQ: TFM) announced last October that it would explore a sale of the business. Comparable sales have declined in each of the past three quarters, getting worse with each report and hitting 3.7% in its most recent quarter.

The story became more intriguing last week, when Reuters reported that Kroger was in the second round of an auction to purchase The Fresh Market, competing against several private-equity firms. Fresh Market shares jumped 23% on the news, as a competitive auction could indicate a high purchase premium.

It figures that Kroger would be part of the mix. The company is the largest pure-play grocer in the country, having snatched up banners including Fred Meyer, King Soopers, and Ralph's over the years, and more recently Harris Teeter and Roundy's. Kroger's acquisition strategy has proved to be a savvy one, as it allows the company to grow without further saturating the grocery market. As competitors add new stores, it only makes sense that weaker brands would lose sales, as supermarkets are a slow growth industry and can only support so many new stores each year.

What Fresh Market means to Kroger
Fresh Market has 183 stores in 27 states, enough to grow Kroger's base by about 7%. At a market cap of $1 billion, Fresh Market wouldn't break Kroger's bank in an acquisition, and at a P/E of 17 the company trades at a lower valuation than Kroger itself. Kroger has taken out debt to fund its recent acquisitions and now has $11.5 billion in debt on its books, though low interest makes borrowing for the purpose of acquisitions more compelling than waiting a few years.

The Fresh Market is strongest in the Southeast, with 40 stores in Florida, more than it has in any other state. Kroger currently has just one store in Florida and would like a bulkhead in the country's third-largest state. However, Fresh Market's other stores tend to overlap with Kroger's brand, including Harris Teeter, as Kroger is strongest in the Southeast and in the Ohio Valley.

Despite Fresh Market stock's recent woes, the business is a better one than Kroger, according to some important metrics. Through the first three quarters of 2015, Fresh Market has delivered a profit margin above 3% while Kroger's is below 2%. Profitability, then, isn't the issue for Fresh Market, though its profits have slightly decreased over the past three quarters.

How Kroger handles acquisitions
Historically, Kroger has preferred to acquire only well-run rivals, avoiding turnaround plays. Its latest acquisition, Roundy's, shows a departure from that approach, as the Midwestern grocer has been losing market share lately, and Kroger plans to invest money to overhaul some of the older stores in Milwaukee and Madison and expand the brand in that region.

In its integration of Harris Teeter, Kroger has mostly left the brand alone. CEO Rodney McMullen has said that the two brands have been able to learn from each other and apply best practices. Kroger, for example, has borrowed Harris Teeter's online ordering system and Harris Teeter's supply chain has benefited from its new owner. Kroger also converted a few Harris Teeter locations in Nashville, but it has left the majority operating under their original banners, with the distinct Harris Teeter branding and higher-end product offering.

Revitalizing Fresh Market's growth will be the biggest challenge for its suitors, but Kroger has as a strong track record in that department. Ultimately, the decision will come down to the price tag. At its current level, taking over The Fresh Market would make sense for Kroger, but that calculus changes as the premium goes up. Its current stock price resembles what it paid for Harris Teeter, but if a bidding war ensues, Kroger may justifiably lose interest.