Please ensure Javascript is enabled for purposes of website accessibility
Log In Help Join The Motley Fool
Free Article Join Over 1 Million Premium Members And Get More In-Depth Stock Guidance and Research
By Sean Williams – Feb 22, 2016 at 10:14AM

From its storied history to its current valuation, you'll need all 10 fingers to count the reasons why Johnson & Johnson is a stock to consider owning in your portfolio.

Not much has gone right in 2016 for the healthcare sector. Threats of a global growth slowdown compounded with the air being let out of high-premium clinical-stage stocks have sent the Nasdaq Biotechnology Index tumbling 22% year to date through Feb. 18 and pushed the usually-more-reliable Market Vectors Pharmaceutical ETF lower by 10% over the same time frame.

But look to the biggest name in the entire sector, Johnson & Johnson (JNJ -0.71%), a healthcare conglomerate sporting a $281 billion valuation, and things are markedly different. Whereas healthcare stocks are veritably breaking at the knees, shares of Johnson & Johnson are up by almost 2% as of February 18.

10 great reasons to own Johnson & Johnson stock
Yet, this great start isn't due to luck. It's based on a handful of factors that make Johnson & Johnson a great stock to consider owning. In no particular order, here are 10 reasons why J&J shareholders have every reason to feel confident about holding this company over the long term.

1. History
One of the best reasons to own Johnson & Johnson is its storied history. Since being founded 130 years ago, J&J has built up a strong list of brand-name products in its consumer healthcare, pharmaceutical, and medical device lines. If you've ever taken a Tylenol, put on a Band-Aid, used Listerine to clean your mouth after brushing your teeth, or taken Sudafed for a cold, you've purchased a Johnson & Johnson product. Strong brands allow companies to build emotional attachments with consumers, and these bonds are where lifelong customers are made.

2. Business diversification
Johnson & Johnson may be the face of the company everyone knows, but it is actually comprised of more than 250 subsidiaries. Although this can make things a little complex in some respects, it also means that the business is extremely well diversified. Whether the economy is booming or in recession, J&J probably has a business segment that's outperforming. It also allows J&J to make bolt-on purchases or sell non-core assets with ease.

3. Cutting-edge innovations
Whether from its pharmaceutical or device segment, Johnson & Johnson is on the leading edge of innovation. Examples would be its research and licensing in oncology, which have helped bring blood cancer drug Imbruvica and multiple myeloma therapy Darzalex to pharmacy shelves. Used in later lines of treatment, both therapies provided a substantial boost in response rates in clinical trials compared to prior standards of care.

4. A substantive R&D budget
Comparatively speaking, J&J also has one of the largest research and development budgets in the world. According to Fortune, the company spent $8.2 billion on R&D in 2013, or about 11.5% of total revenue. It's also brought 14 new molecular entities to pharmacy shelves since 2009, of which seven have reached $1 billion, or more, in annual sales. These investments in R&D are paying off in a big way, and J&J understands the importance of this organic growth aspect.

5. Long-tail medical device opportunity
Johnson & Johnson is also primed to benefit from an aging American and global population. Shifting demographics are showing that in all but a rare few countries around the world people are living longer than ever, and access to medical care is improving. The result should be a heightened reliance on medical devices as the global population ages, thus providing J&J with a multidecade, long-tail growth opportunity.

6. Inelastic products
Another reason to like J&J is that a vast majority of the products it sells are inelastic in both demand and price. What this means, in simpler terms, is that demand for many of J&J's products stays fairly constant, or even grows, regardless of how good or bad the global economy is doing. The reason this is the case is because consumers can't choose when they get sick. If they need medicine, then they need medicine. It's pretty simple. With the exception of elective surgical procedures, demand for its products tends to remain strong, which gives Johnson & Johnson no incentive to cut its prices. 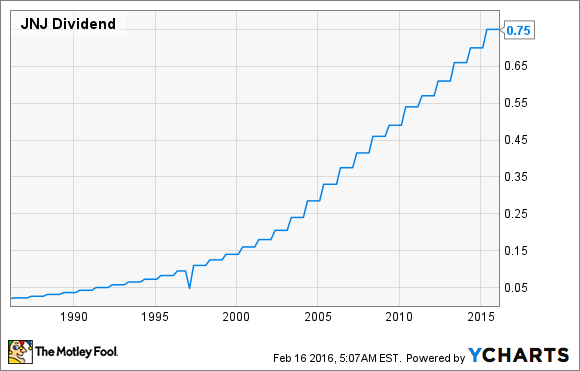 7. Dividend Aristocrat status
Additionally, Johnson & Johnson is among an elite class of more than four dozen companies, known as Dividend Aristocrats, that have raised their annual dividend payment to shareholders for a minimum of 25 consecutive years. In the case of Johnson & Johnson, it's done so for 53 straight years. You can count on two hands how many companies can boast a longer streak of annual dividend increases compared to Johnson & Johnson. And, by the way, its 3% yield is also notably higher than the 2.4% current average yield of the S&P 500.

8. AAA credit rating
On top of producing at least $11.4 billion in free cash flow in each of the past 10 years, Johnson & Johnson is one of just three publicly traded companies to bear the AAA credit rating (the highest possible rating) from Standard & Poor's. Mind you, there are more than 7,000 publicly traded companies in the United States. Even with around $20 billion in debt, Johnson & Johnson's consistently strong cash flow and its sizable net cash position of $18.5 billion (meaning $38.5 billion in cash on hand) mean S&P has the utmost faith in J&J's ability to meet its debt obligations.

9. Management
There's a lot to like about Johnson & Johnson if you just look at the company's management team. If you prefer cohesive leaders who truly believe in the company, look no further than its CEOs. Since 1886, there have only been nine total CEOs, and the current CEO, Alex Gorsky, has been with the company for 24 of the past 28 years. A management team that doesn't change often typically is highly focused on value creation -- and in J&J's case, growing its superior dividend.

If your investment portfolio is feeling particularly beat up over the past month and change, perhaps it's time to consider adding some stability with healthcare giant Johnson & Johnson.