Sprint's latest family plans offer the same price as Verizon, but with a ton more data.

Wireless customers hardly go a few months without being offered a great deal these days. The major U.S. carriers are in a bitter battle to steal each others' customers and Sprint (S) just showed that again last week with its new data plans.

The carrier is offering new, "Better Choice" plans that compare in pricing to Verizon Communications' (VZ 0.60%) family plans -- but with much more data.

Here's how the plans break down: 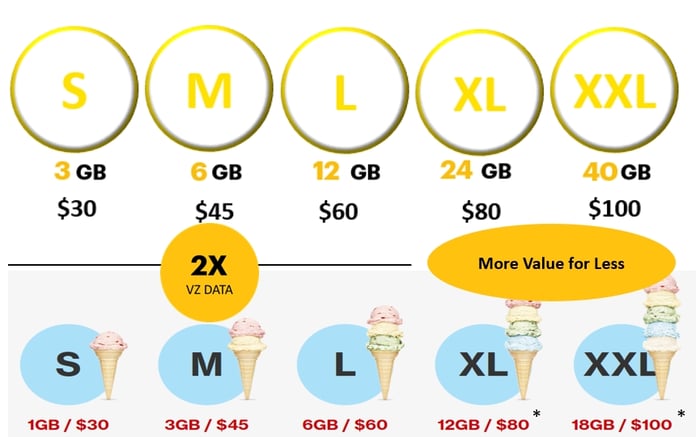 Ice cream cones aside, the chart above shows just how sweet of a deal Sprint's plans can be for Verizon customers. Sprint's top tier plan allows a family to share 40 GB of data for just $100. Under Verizon's plan, customers would pay the same price but get just 18 GB to share.

But though Sprint's offering much more data than Verizon's plans, its network can't deliver the same quality. While T-Mobile (TMUS -0.08%) has done a fantastic job catching up to Verizon's LTE coverage, and nearly matching it, Sprint hasn't had the same success. The latest Open Signal data show Sprint still falls behind Verizon, T-Mobile, and AT&T for both LTE speeds and network coverage.

Nowhere to go but up
Sprint's targeting Verizon customers with its latest plan, but really it'll take wireless subscribers anywhere it can find them. After years of of losing subscribers and falling into fourth place behind T-Mobile for total customers, the company snagged 501,000 postpaid net adds in fiscal Q3 2015. That's an impressive increase of 471,000 customers from the year-ago quarter.

Sprint is in do-or-die mode right now, as the carrier spends billions trying to reinvigorate its business. Meanwhile, rival T-Mobile is siphoning off other carriers' subscribers. The self-proclaimed Un-carrier has added more than 1 million subscribers each quarter for the past 11 quarters straight.

In the wake of T-Mobile's rise of both customers and network quality, Verizon has become more aggressive in handing out deals as well. The carrier increased the data allotments for its prepaid plans just a few weeks ago. And the carrier's latest ad attempts to paint rival networks in an unfair light. T-Mobile has made of point of attacking Verizon head on recently, criticizing the carrier for its misleading ads. Sprint has followed suit, and made its own ad touting its network and claiming Verizon isn't giving consumers the full picture when it comes to network speeds.

If Sprint can continue on its current subscriber trajectory, the carrier will likely see some brighter days ahead. Sprint doesn't have anything to lose right now by undercutting Verizon's data plans and it should help bring in more subscribers in the current quarter.

But the carrier needs many more quarters of subscriber growth before it can start really getting excited about its progress. Attacking the top wireless carrier is a good start for now (it's worked pretty well for T-Mobile so far), but Sprint will need to bring an onslaught of deals for the foreseeable future. A good part of T-Mobile's success has come from offering new Un-carrier promotions and features every few months -- and Sprint needs the same to bring sustainable customer growth.