Cord-cutting is cutting to the core of traditional broadcast operations. Has AMC found a way around this? 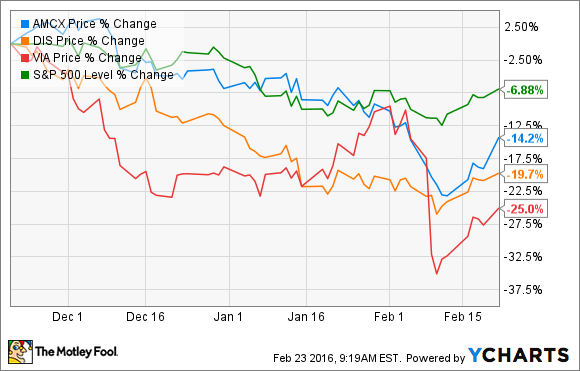 Media producer AMC Networks (AMCX 0.86%) is slated to report fourth-quarter earnings on Thursday morning. Like many other media stocks, AMC has been lagging behind the broader market in recent months. Investors will be watching the latest report to see how the company is faring.

Management guidance
AMC is not in the habit of publishing firm quarterly guidance targets. Instead, this management team prefers to paint its forecasts in broad strokes, but the color commentary is broken down into a separate outlook for each reportable segment.

On that note, CFO Sean Sullivan drew up the following fourth-quarter targets three months ago. The national networks division is seen posting "solid growth" year over year. Growth in affiliate network sales within this block should exceed 10%, roughly on par with the pace seen in the third quarter. Non-affiliate revenues will follow normal seasonal patterns, which means a dip compared to the third quarter but a mild boost compared to the year-ago quarter.

International sales are expected to stay comparable to the third quarter, as currency headwinds continue to chip away at AMC's modestly positive business trends.

Operating costs are seen rising unseasonably fast because AMC is investing heavily in production and promotion of some upcoming shows. That slate includes miniseries The Night Manager, featuring bankable stars Hugh Laurie and Tom Hiddleston. Around the same mid-April domestic premiere date, Fear the Walking Dead comes back for another shot at energizing TV audiences. Established hit series The Walking Dead recently came back from its mid-season hiatus, and Better Call Saul kicked off its second season.

All of these shows are worthy of both heavy promotion and costly high-grade production values. That's especially true now that long-running eyeball magnet Mad Men is off the air for good.

Industry trends
That being said, TV broadcast specialists like AMC are riding a rocky road at the moment. Cord-cutting is a very real thing nowadays, which undermines the expected subscriber growth of traditional cable and satellite networks. That worry, in turn, makes advertisers less likely to pay a large premium for their TV ad slots.

Have a peek at the three-month chart above. You see that tremendous mid-February dip in Viacom (NASDAQ: VIA) (VIAB) share prices? That came from a disappointing revenue stream in Viacom's first-quarter report. The biggest culprit? Viacom's supposedly rock-solid TV broadcast operations were not stable at all, and CEO Philippe Dauman complained about "significant industry disruption."

Walt Disney's (DIS 1.10%) February plunge was a weird beast. The House of Mouse crushed analyst expectations on both the top and bottom lines, driven by the record-breaking Star Wars: The Force Awakens saga. Disney was firing hard on three out of its four operational cylinders, with the only weakness falling in the media networks division. So what did Disney's stock do? It fell nearly 5% the next day, of course.

The same general TV environment obviously also affects AMC Networks. The cord-cutting industry trend could lead to AMC falling short of its stated affiliate revenue goals. Keep an eye on the top line this Thursday and see how the company is navigating these treacherous broadcast industry waters.