Here's a quick overview that all investors need to know if they are interested in investing in this long-term winner.

Jazz Pharmaceuticals PLC (JAZZ 1.30%), a sleep and hematology/oncology focused drugmaker, has put up stellar returns for long-term investors. Anyone smart enough to add a few shares of this company to their portfolio 5 years ago would be up sitting on a gain of more than 400%, which smashes the returns of the biotechnology sector in general as measured by the SPDR B&P Biotech ETF (XBI 3.34%). 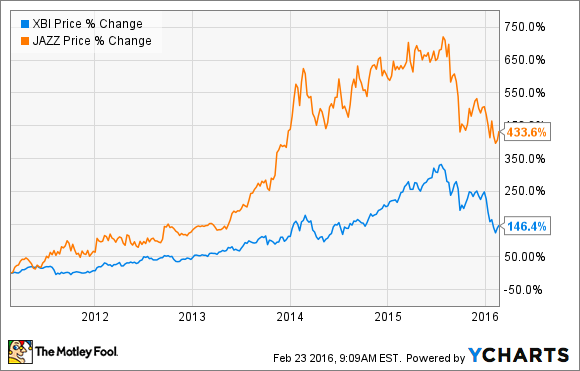 So what's going on inside this company that allowed it to outperform the returns of the red hot SPDR B&P Biotech ETF? Below is a quick primer on what this company has accomplished that has led to its huge market success.

How Jazz Pharmaceuticals makes money
Jazz has managed to bring a handful of drugs to the market that together are expected to ring up more than $1.3 billion in total sales in 2015. However, the lion's share of revenue comes from sales of Xyrem, Jazz's flagship narcolepsy medication. Narcolepsy is an orphan disease that affects about 160,000 people in the U.S. alone and causes patients to lose control over their sleep-wake cycles, which leads to a variety of undesirable symptoms. Xyrem helps patients with this disease better control their symptoms, and it is currently the only FDA-approved drug that treats both cataplexy (a brief loss of muscle control) and excessive daytime sleepiness. Sales of Xyrem are expected to eclipse more than $950 million in 2015. 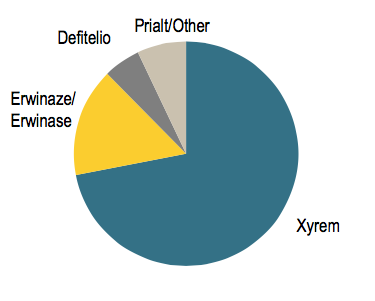 Jazz's second best selling drug is Erwinaze/Erwinase, a specialized drug that treats acute lymphoblastic leukemia, or ALL, in patients that have an allergy to traditional ALL treatments. While that specific labeling only applies to a few thousand patients each year in the U.S., Jazz is able to charge more than $150,000 annually for its specialized treatment which should allow it to ring up more than $200 million in revenue in 2015 from sales of the drug.

The last piece of the company's revenue pie that is worth mentioning is defitelio/defibrotide, which is currently approved in the EU as a treatment of severe hepatic veno-occlusive disease in patients undergoing hematopoietic stem cell transplantation. This is another extremely rare disease that afflicts only a few thousand patients in the U.S. and EU each year, but the FDA has granted the drug with its covered fast-track approval designation to help stateside patients with this condition. Sales in 2015 are expected to be roughly flat with 2014 and come in around $70 million, but sales could get a big boost in 2016 if U.S. regulators give the drug the thumbs up.

How Jazz Pharmaceuticals will grow from here
Jazz has a number of initiatives in place that should allow it to continue growing at a rapid clip. The biggest lever that the company can pull to grow is to continue to expand the use of Xyrem. That could happen through increasing market penetration as well as label expansion, and the company is actively pursuing both strategies.
A phase 3 study to test how well Xyrem works in pediatric patients who have narcolepsy with cataplexy will complete enrollment later this year. The company is also investing in creating new tools to help educate physicians and patients and make it easier to identify the symptoms of narcolepsy. It's estimated that more than half of patients with narcolepsy have yet to be properly diagnosed -- let alone treated.

Looking beyond Xyrem, the company has built out a nice pipeline of products in late stage trials that will help to expand its position in both the sleep and hematology/oncology markets.

The FDA is set to rule on March 31 whether or not they will approve the sale of defibrotide in the U.S. Peak sales estimates for this drug are expected to be around $480 million annually.

Another drug that looks exciting is Jazz's next generation sleep drug JZP-110, which is being studied in both Narcolepsy and excessive daytime sleepiness in patients with obstructive sleep apnea. An estimated 300,000 Americans could potentially qualify for JZP-110 if it manages to win approval for both conditions.

All told, analysts are currently projecting that the company will grow around 17% annually over the next 5 years.

How to value Jazz Pharmaceuticals
Unlike most other biotechnology companies that are currently losing money, valuing Jazz Pharmaceuticals is a relatively straightforward process, since the company is solidly profitable. One simple valuation tool that investors can look at is the company's price-to-earnings ratio on both a trailing and forward basis. 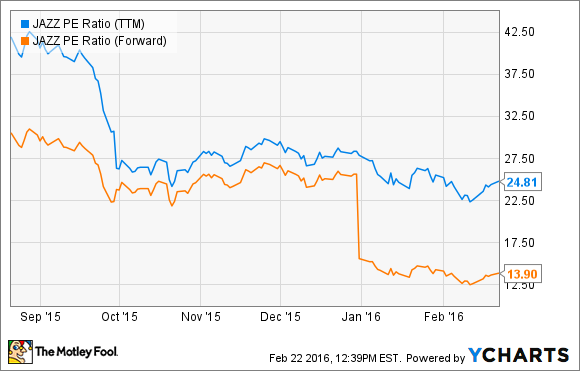 With a trailing P/E ratio around 25 and a forward P/E ratio under 14, Jazz isn't an expensive stock. That's especially true when you consider that it boasts a strong product portfolio that is positioned for continued growth and that it has a strong pipeline in place. It doesn't hurt that Jazz is headquartered in Ireland where it enjoys a low corporate tax rate, which could make it a tax inversion target for a U.S.-based company looking to lower its tax bill.

Tying it all together
All in all, there is a lot to like about Jazz Pharmaceuticals as it is profitable, growing, and trades at a modest valuation. If you are an investor looking for a lower-risk company from the biotechnology sector, then Jazz could be a solid choice -- especially if we get good news from management on this afternoon's earnings conference call.