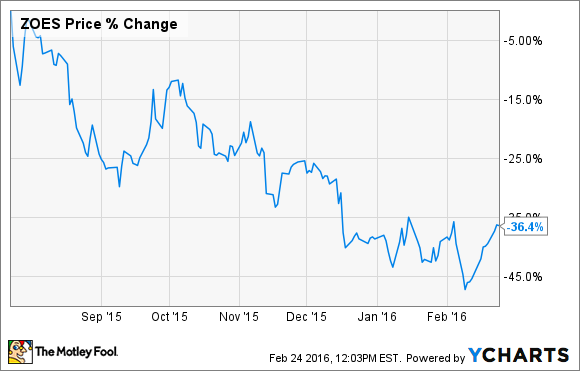 The Mediterranean restaurant chain is scheduled to report fourth-quarter results on Feb. 25. Here are two key items to watch that will give investors insight into where the company is headed.

Restaurant openings
With 170 locations in 17 states, Zoe's Kitchen is still very early in its growth stage. So far, investors have been willing to accept low levels of current profitability for the promise of substantially higher profits in future years. In order for shareholders to remain patient, they will want to see evidence that this regional-to-national growth story is still intact.

Zoe's Kitchen opened 30 restaurants in 2014, and 33 in 2015. When the company reports its fourth-quarter earnings on Thursday, investors will be eager to hear management's store-count expansion plans for 2016. A continued acceleration in the pace of new-store openings will likely be met with shareholder applause.

Comps
The number of new-store openings is just one part of Zoe's Kitchen's growth formula. Another is an increase in comparable-restaurant sales -- an important metric that, when rising, gives evidence that Zoe's Kitchen can continue to grow its store base without cannibalizing sales at its existing locations.

Zoe's management team guided for comp growth in the range of 5.5% to 6% in its full-year 2015 outlook. If the company can continue to increase comparable-restaurant sales at a pace that approaches those levels in 2016, it will be a strong sign that the Zoe's Kitchen concept is resonating strongly with consumers, and that the company's expansion strategy remains on solid footing.

How to access Zoe's Kitchen's results
Zoe's Kitchen will announce its fourth-quarter financial results on Thursday, Feb. 25 at approximately 4 p.m. EST. Both the earnings release and a link to the conference call will be available at the company's investor relations website.

Joe Tenebruso has no position in any stocks mentioned. The Motley Fool owns shares of and recommends Zoe's Kitchen. Try any of our Foolish newsletter services free for 30 days. We Fools may not all hold the same opinions, but we all believe that considering a diverse range of insights makes us better investors. The Motley Fool has a disclosure policy.