These days, there is a lot of talk about virtual reality headsets and the impact that these will have on the performance requirements of gaming-focused computers. Indeed, graphics specialist NVIDIA (NVDA 1.73%) claims that playing games in VR requires seven times the performance that playing a game on a typical computer monitor does. 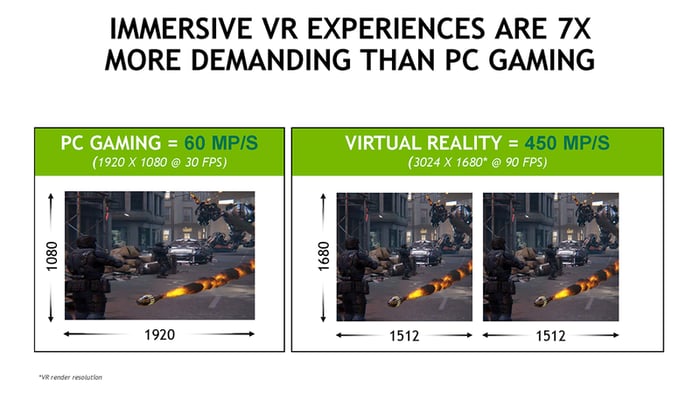 Although this slide makes it seem as though VR is going to be a major driver of graphics performance requirements, I believe that even if VR never goes mainstream, the natural increase in traditional PC monitor display resolutions and refresh rates will have the same effect.

Reworking NVIDIA's math
First of all, I don't know of any gamer that would consider 30 frames per second an acceptable target frame rate. For the non-gamers reading this, the user experience at 30 frames per second -- particularly in fast-action games -- is suboptimal.

That said, given that VR is likely to be a kind of niche, high-end solution, I don't think comparing the requirements of a PC running a commodity 1920x1080, 60 Hertz (i.e., 60 frames per second) monitor is at all fair.

A fairer comparison in my mind would be high-end gaming-oriented monitors against the expensive-and-niche VR headset.

Higher resolutions and refresh rates really drive up performance requirements
These days, if you want to buy a truly high-end gaming monitor, you have two choices:

In the case of the first, the increased resolution means 1.78 times the number of pixels to push. The 144 Hz refresh rate means that the frames need to be drawn at a rate 4.8 times that of the monitor described by NVIDIA. Combining those gives around 8.54 times the graphical horsepower required relative to the 1920x1080, 30 frames per second target given.

Doing this calculation with the 4K monitor given above yields a full four times the number of pixels at twice the frame rate, or about eight times the requirements of the baseline configuration that NVIDIA gave.

The above calculations show that the kind of resolutions and frame rates that higher-end gaming PCs need to drive are already at least as demanding as those required by upcoming VR headsets, if not more so.

As resolutions and monitor refresh rates increase (I wouldn't be surprised to see 4K monitors at 120 Hz-and-up refresh rates arrive within the next year or so), those demands will only go up.

Higher resolutions and frame rates should become more affordable on the PC
According to the Steam Hardware Survey, 1920x1080 is by far the most popular resolution, with 1366x768 the second most popular. Indeed, only a small fraction of Steam users (which I believe to be a good proxy for the PC gaming population) run games at higher resolutions.

That said, as prices for higher resolution/higher frame rate monitors come down, I believe that adoption of such monitors will increase, leading to an easy increase in how demanding games are to run at the native resolutions of gamers' monitors.

It's not all about resolution
Although an increase in the average display resolution among gamers should help drive up graphical requirements, it's also important to note that games themselves continue to become intrinsically more demanding.

Objects with higher polygon counts, more sophisticated lighting and shadowing techniques, and other cool visual effects all lead to increases in hardware requirements.

These resolution-independent quality enhancements, coupled with the resolution increases, are certainly part of why I'm positive on NVIDIA's graphics business irrespective of the success (or lack thereof) of VR headsets.

Ashraf Eassa has no position in any stocks mentioned. The Motley Fool recommends NVIDIA. Try any of our Foolish newsletter services free for 30 days. We Fools may not all hold the same opinions, but we all believe that considering a diverse range of insights makes us better investors. The Motley Fool has a disclosure policy.