Please ensure Javascript is enabled for purposes of website accessibility
Log In Help Join The Motley Fool
Free Article Join Over 1 Million Premium Members And Get More In-Depth Stock Guidance and Research
By Asit Sharma - Feb 24, 2016 at 10:56AM

The accounting and tax giant issues fiscal 2016 second-quarter earnings on Thursday. Here are four big-picture areas to key in on to make sense of the company's 2016 prospects. 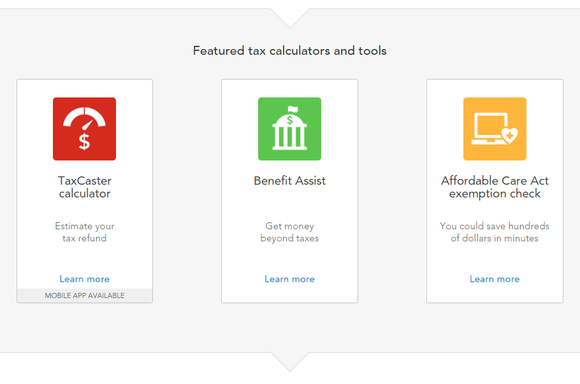 It's tax season already. Time to use Intuit's "TaxCaster" calculator and see what you owe Uncle Sam or vice versa. Image source: Intuit.com.

Online accounting and tax software provider Intuit (INTU 0.58%) files fiscal 2016 second-quarter earnings on Thursday after the markets close. Below, let's take a brief look at four "big-picture" areas investors can hone in on to make sense of Intuit's current earnings, as well as its prospects for the rest of this year.

Will Intuit meet or miss its own numbers?
Last quarter, the software giant issued revenue guidance of between $880 million-900 million for Q2 2016, which represents growth of 17%-20%. The company also forecasted operating income of between $15 million to $25 million.

The bottom line in this guidance is particularly important, as hitting the operating income target would reverse a trend of recent years. Traditionally, Intuit has posted healthy operating profits in its fiscal second quarter, but in 2014 and 2015, the company sustained operating losses of $46 million and $98 million, respectively. Last year's loss was due in part to accounting changes management initiated to more clearly reflect the recurring income from the company's rising software subscriptions. As 2016 progresses, we should see a bit smoother revenue from quarter to quarter -- beginning with the Q2 report on Thursday.

Check in on the health of operating margin
The operating profits discussed above have implications for the entire year as well. Before fiscal 2015, Intuit was extremely consistent in maintaining an annual operating margin in excess of 30%. Impressively, the company achieved an operating margin of roughly 30.5% in each of the four years preceding 2015.

But due to an impairment charge and its accounting change last year, Intuit's operating margin declined to 17.6% in 2015. And last quarter, the first of the new fiscal year, the company booked a negative margin of 4%.

Management's full-year 2016 guidance implies a final operating margin of roughly 25%. So after negative margin in Q1, and what should be a roughly 3% margin in Q2 (based on management's quarterly guidance), the next two quarters will necessarily have to shine for Intuit to meet its current-year projected operating margin.

Of course, Intuit usually sees significant revenue and the bulk of its profits in the third quarter of each fiscal year, which includes the three busiest months of tax season. This will still be the case in 2016, although Q3 may not look quite so outsized relative to other quarters, as the company is recognizing revenue and profits on a more ratable basis as discussed above. All in all, look for management to offer robust guidance on Thursday for quarters three and four to close out the year.

QBO represents the future of the company's software model, as it's gradually replacing legacy "QuickBooks" desktop versions, while encompassing an expansive ecosystem of business software. This ecosystem of related software includes the fast-growing "QuickBooks Self-Employed," which is being marketed heavily toward participants in the sharing economy -- that is, everyone from self-employed entrepreneurs to part-time Uber drivers.

QBO's growth curve will inevitably slow, and we may see some downshifting of subscriber additions as early as this quarter on Thursday's release. Long-term investors should be prepared for a possible drop-off from the more than 50% growth posted in fiscal 2015 and Q1 2016.

Also, investors should assess the health of non-U.S. subscriptions, as the international addressable market for QBO holds many years of potential profitable growth. Last quarter, expansion in non-U.S. subscriptions topped 109%, a deceleration from previous quarters but an extremely healthy pace nonetheless.

Replenishing cash and rebuilding the balance sheet
As I wrote after Intuit's last earnings report, the company cleaned out its coffers in fiscal Q1 2016 to execute a share repurchase of $1.3 billion -- that's a huge number of shares to buy back relative to Intuit's balance sheet.

This, in retrospect, turned out to be a savvy initiative by management, as the trades were executed shortly after Intuit's shares took an uncharacteristic and steep fall when previous quarter earnings (Q4 2015) disappointed investors. The company was able to repurchase its own shares on the cheap, at an average price of $88.50.

However, the share buyback consequently thinned out the company's balance sheet: Intuit liquidated nearly $900 million in investments, decreased its cash balances from $808 million to $474 million, and tapped into $350 million on its credit facility, in order to finish the transaction while supplying cash for normal operations.

Investors will want to check in on Intuit's cash flow statement and balance sheet this quarter to see that some of the software provider's strong cash flows are now being directed into the bank to top up cash on hand. Note that management has just added more borrowing flexibility, however. On Feb. 1, the company disclosed that it had replaced its $500 million credit line, due to expire next year, with a $1.5 billion, five-year credit facility.

It's possible, though, that we'll find that cash balances haven't increased much from last quarter, and that Intuit will show credit line borrowings in excess of the $350 million left on the books from last quarter. If this is the case, it will be a function of the full-year capital expenditure target that was raised last quarter, from a range of between $280 million-$300 million to a new band of $490 million-$510 million, due to the acquisition of Intuit's new San Diego Campus. So, while it would be nice to see some replenishment of resources, it may be another quarter or two before cash and investments begin to grow again.

Asit Sharma has no position in any stocks mentioned. The Motley Fool owns shares of and recommends Intuit. Try any of our Foolish newsletter services free for 30 days. We Fools may not all hold the same opinions, but we all believe that considering a diverse range of insights makes us better investors. The Motley Fool has a disclosure policy.