Please ensure Javascript is enabled for purposes of website accessibility
Log In Help Join The Motley Fool
Free Article Join Over 1 Million Premium Members And Get More In-Depth Stock Guidance and Research
By Reuben Gregg Brewer – Feb 25, 2016 at 9:45AM

When it comes to aerospace and defense, Lockheed is huge... but here are two other names you should be looking at, too, if you like dividends.

Lockheed Martin Corporation (LMT -0.90%) is a giant aerospace and defense contractor. It's one of the most recognizable names in the industry and is a great company. But it's not cheap right now, which is why you might want to take a look at these two other companies that play in the same spaces.

Good company, expensive stock
Lockheed's current price-to-earnings ratio is above 19. Its five-year average, however, is closer to 14, so it's trading hands about 35% above its recent average. It's expensive based on price to sales and price to cash flow, too. Its yield, meanwhile, is around 3%, which is about 10% lower than the company's five-year average. It's a good company, but it's an expensive stock. So it's worth taking a look at some alternatives.

For example, Boeing (BA -3.39%). This company is best known for its iconic passenger planes, but it does a lot more. For example, it generated $30.4 billion from its defense, space, and security businesses last year. To be fair, the rest of its $96.1 billion in revenue came from commercial jets, but it's got some significant similarities to Lockheed.

One thing that's very different, however, is valuation. In fact, Boeing recently got even cheaper than it had been because the SEC is investigating its accounting treatment for its 747 and 787 aircraft programs. That's nothing to brush off, but it's likely to cause more of a black eye than broken bones. Thiw could be a nice buying opportunity, with the shares recently trading around 10% below its trailing five-year average for P/E, about 10% below its price-to-sales norm, and nearly 25% below its price-to-cash flow average.

The yield, meanwhile, is about 3.8%. That's more than you'll get from Lockheed and a whopping 70% higher than Boeing's five-year average yield. In all, Boeing's accounting issue could represent a good entry point for investors willing to be greedy while others are fearful. And while some might counter that Boeing looks like it's entering an economic soft patch, it's got a $490 billion backlog. That's around five years' worth of revenue at current run rates -- it has plenty of time to adjust to an industry slowdown.

Distorted numbers
Another stock to look at is United Technologies (RTX -0.58%), which just sold its helicopter division to Lockheed in an effort to streamline its own business. United Technologies is trading nearly 15% below its average price to book value over the trailing five years and about 10% below its historical price-to-cash flow ratio.

The one ratio that makes United Technologies look expensive, however, could be confusing. Its price-to-earnings ratio is nearly 20, versus a five-year average of around 16. But that's largely because of one-time charges meant to improve the business, by bolstering margins through cost cuts. Take the one-time charges out, and the company's P/E drops to around 14, 12% or so below its historical average. 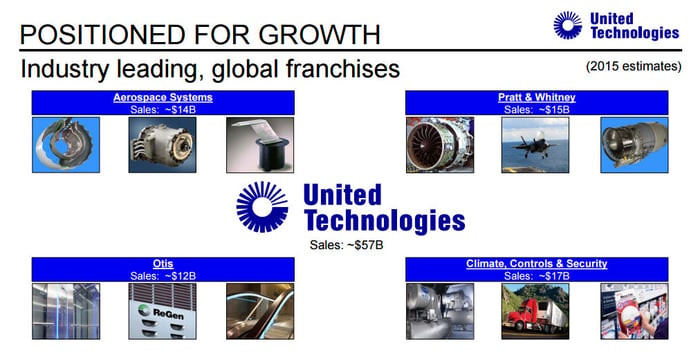 All of that said, United Technologies is a more diversified company than either Boeing or Lockheed. For example, aerospace in some form makes up around half of United Technologies' business, but the rest includes things such as Otis elevators, security products, and climate control equipment. That, however, might be a desirable attribute if you don't want to be so heavily exposed to the military and/or aerospace markets.

Good vs. cheap
When you're looking at Lockheed Martin, there's little doubt that you're researching an industry-leading company. But that means it's a good company, not a good value. Right now Lockheed looks expensive relative to alternatives such as Boeing and United Technologies. And while of this pair, only Boeing yields more than Lockheed, don't write United Technologies off on the dividend front. The company has 22 years of annual dividend increases behind it, and the yield is well above its historical norm -- suggesting that, in terms of valuation, now could be a good time to jump aboard. If you're looking at Lockheed, you should consider these two alternatives as well.