After the post-earnings sell off Wednesday, an analyst sees this stock being a strong buy.

What: Shares of Memorial Resources Development (NASDAQ: MRD) jumped more than 10% by 12:45 p.m. EST on Thursday. Fueling the enthusiasm was an analyst upgrade after what was viewed as an "extreme sell-off" in response to the company's fourth-quarter earnings report on Wednesday: 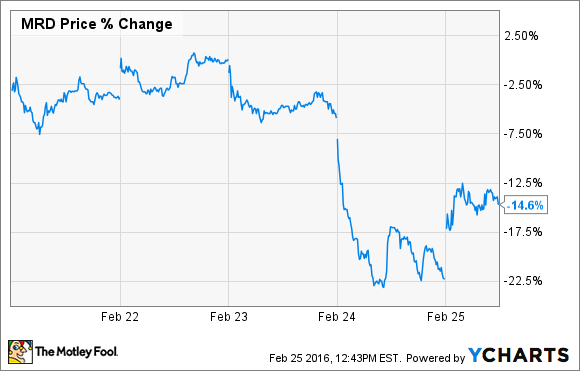 So what: An analyst from Raymond James upgraded Memorial Resources Development from outperform to strong buy in response to Wednesday's sell-off. The analyst thought the sell-off was unwarranted and that sellers were overly alarmed by some relatively poor performing wells in some of the company's extreme Northwest Terryville acreage. Instead, the Raymond James' analyst thinks that investors should focus on the 25 Upper Red wells that it brought online last year, which are producing as expected. Despite that bullish take, Memorial Resources Development's price target was lowered from $22 to $20.

Raymond James wasn't alone in calling Memorial Resources Development's recent sell-off overdone. An analyst from RBC Capital reiterated its outperform rating on the company citing its "impressive" production growth and hedge book. Though, like Raymond James, it did reduce its price target from $17 to $15.

Now what: Analysts clearly feel that the market has overreacted to recent updates from Memorial Resources Development. However, while the company's operations might be solid, its operating environment remains very tough right now. Because of that investors are apt to react harshly to anything viewed as a negative until there's at least some improvement in overall industry conditions.