Please ensure Javascript is enabled for purposes of website accessibility
Free Article Join Over 1 Million Premium Members And Get More In-Depth Stock Guidance and Research
By Matthew DiLallo - Sep 29, 2015 at 9:26AM

Memorial Resource Development has been buying acreage in Northern Louisiana, which is closer to LINN Energy LLC’s more promising developments.

LINN Energy LLC ( LINEQ ) spent much of the past two years reshuffling its portfolio to better stabilize its production profile. This meant shedding acreage positions that needed to be drilled horizontally as the production of these wells declines fast, and replacing these assets with those that provided more stable production. While the company completed much of its work last year, it still has a few areas that could potentially be monetized over the next year. Thanks to some recent activity from Memorial Resource Development (NASDAQ: MRD), LINN Energy could be even closer to realizing the value of one of its key positions.

Keeping an eye on the neighbor

Memorial Resource Development is one of a handful of companies focused on developing what's known as the Cotton Valley Trend, which runs through East Texas and North Louisiana. As the map on the slide below shows, it has a concentrated position in Lincoln Parish, Louisiana. 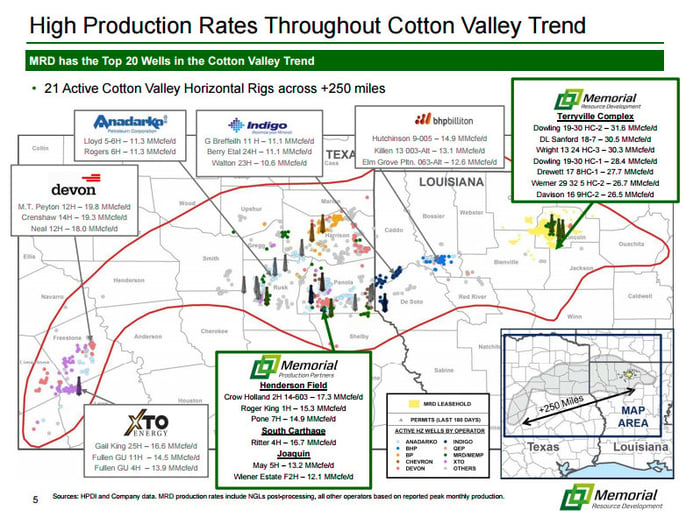 Memorial Resource Development's position is important to LINN Energy because LINN owns that little pink dot just to the west of Memorial's position. It's acreage acquired from Devon Energy in the aforementioned portfolio transition that was part of a larger package of low decline natural gas assets. What LINN Energy has since discovered is that this little piece of real estate holds a lot of promise.

On LINN Energy's second-quarter conference call, CEO Mark Ellis specifically pointed out the potential of its acreage position in the region saying:

[We continue to] evaluate and develop areas which we believe hold significant future value potential. The company currently has approximately 10,000 net acres in the Ruston area and approximately 20,000 net acres in the Calhoun area, both located in North Louisiana. We recently completed a vertical test well in the Ruston field encountering multiple Bossier intervals confirming a continuation of the Terryville field trend onto our acreage position.

This acreage position, as the map below notes, is right next door to the Terryville Field that Memorial Resource Development finds so promising. 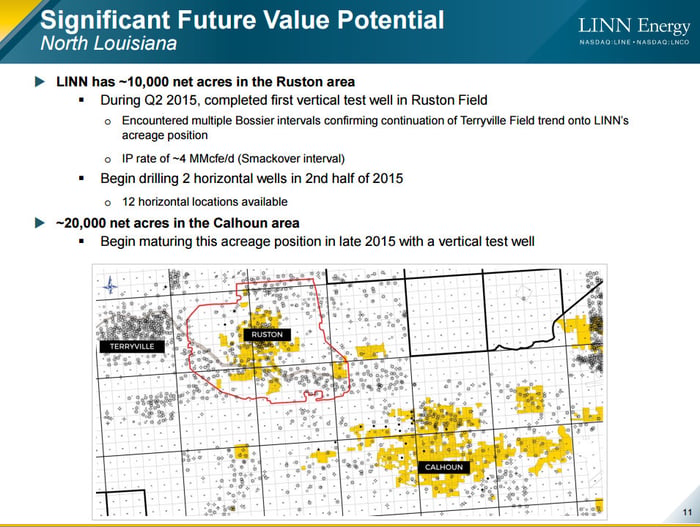 Loading up on Louisiana
This bodes well for LINN Energy for two reasons. First, it can see that Memorial Resource Development is having a lot of success drilling wells right next door. For example, the company recently turned eight new well pads into sales, consisting of 22 wells. Memorial called the initial flowback rates of these wells "encouraging." Further, the peak rates from two of the wells delivered the best two peak initial production rates drilled in the field to date.

Because of its success in the play, Memorial Resource Development is actually building its entire business around developing its acreage in the area. It spent $373.8 million so far this year just to bolster its acreage position as it has added up to 132,758 net acres to its portfolio via a number of transactions. The bulk of that acreage is around its Terryville complex and it implies a $3,000 per acre value. In other words, it potentially values LINN Energy 30,000 acres in the play at upward of $90 million. That's a decent chunk of change for a company that has struggled financially during the downturn due to its large debt load.

Investor takeaway
Memorial Resource Development seems to be confirming what LINN Energy has suspected, which is that its acreage in Northern Louisiana is a valuable commodity as it's sitting on a pretty compelling trend. It suggests that LINN Energy could very well be able to sell the acreage, possibly to Memorial Resource Development, and use the proceeds to pay down debt or acquire a cash flowing oil and gas asset elsewhere. It's certainly a positive development for a company that could use one these days.