Please ensure Javascript is enabled for purposes of website accessibility
Log In Help Join The Motley Fool
Free Article Join Over 1 Million Premium Members And Get More In-Depth Stock Guidance and Research
By Adam Galas - Feb 25, 2016 at 10:45AM

Dividend investors know that market crashes are the secret to achieving spectacular total returns and building long-term income and wealth. Thanks to the worst oil crash in 50 years, most energy stocks, even those whose business models aren't directly affected by commodity prices, have been brutalized over the past year. 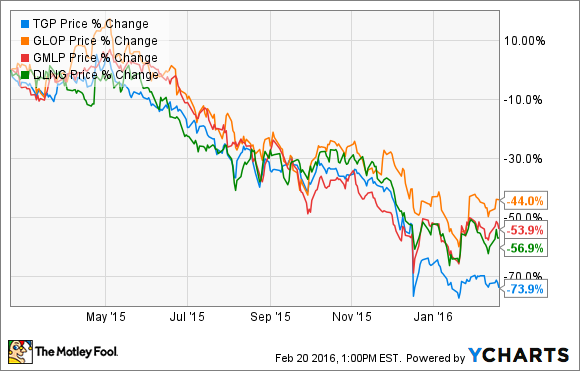 The severe price declines across the industry have sent yields soaring, indicating the market's fear that payouts are about to be slashed. These fears were realized when Teekay LNG Partners slashed its distribution by 80% a few months back.

So the question long-term investors need to ask is: Do these MLPs -- Teekay LNG in particular with the worst price collapse -- represent exceptional value propositions at today's low valuations? Or are these value traps that threaten to blow up your portfolio in a world of potentially low energy prices that could last for years?

To navigate these potentially treacherous waters, let's look at Teekay LNG's final earnings report of 2015. This might help us see what the future is likely to hold for the MLP, as well as a help decide whether Teekay LNG Partners' is worthy of  investment today.

Teekay LNG Partners' steady results in 2015 were courtesy of its midstream toll-booth business model, which focuses on long-term, fixed-fee charters. The slight decrease in revenue, operating income, and DCF was due to the early termination of one of its contracts (which Teekay is challenging in court), as well as the expiration of another charter. Teekay LNG is now in the process of attempting to procure another contract for both tankers.

Of course, the big news for Teekay LNG investors in 2015 was the painful, but necessary, 80% reduction in the payout. This was the result of two factors. First, Teekay has large contractual obligations coming up over the next two years, both in terms of capital expenditures for new tankers and debt coming due.

With the unit price in the tank, the MLP's access to reasonably priced equity financing is pretty much gone. Thus, the distribution cut frees up DCF to fund debt repayments and ship building costs.

However, management did have some good news to report that gives existing Teekay LNG Partners investors a reason to be patient and hold on to their units. For example, Teekay LNG recently took delivery of two new tankers, with another one scheduled for delivery in Q3 2016. In total, these new ships will help grow DCF by over 12% in 2016.

In the longer term, the MLP has several major growth opportunities, including a new 20-year deal with Bahrain to build a regasification terminal that will begin operating in mid-2018. Then there is the previously announced Yamal LNG agreement that secured 25-year contracts for six state-of-the art icebreaker LNG tankers, with deliveries slated for 2018 through 2020.

In fact, by the end of 2020, Teekay LNG expects its new tankers (27 under construction) to boost operating cash flow by 142%.

... in the end it's all about the payout

The preceding table requires some clarification. First, while Teekay LNG's coverage ratio is by far the largest, its new lower distribution isn't necessarily more secure than its peers'. That's because Teekay has $1.75 billion in contractual obligations coming due over the next two years, mostly new ship capital spending. Even with growing excess DCF during this time the MLP may end up being forced to suspend its payout in order to fund these large obligations.

In addition, management admits that the majority of the MLP's growth will come between 2018 and 2020, and analysts don't expect any distribution increases until 2019.

Meanwhile, GasLog Partners, Golar LNG Partners, and Dynagas, while their short-term growth is also constrained by a lack of access to equity financing, also have far smaller contractual obligations coming due through 2017. This means that their much higher yields may actually be more secure than Teekay LNG's.

However, not all LNG tanker MLPs are created equal. Because of much higher short-term obligations, the lowest profitability in the industry, as well as inaccessibility to equity growth markets under present market conditions, Teekay LNG isn't likely to grow its distribution for at least the next few years, assuming its payout can even survive the oil crash.