While Wall Street focuses on expectations, you should keep an eye on Vault. 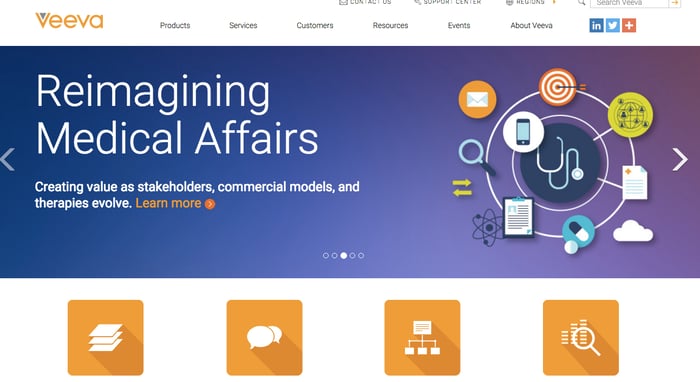 Veeva Systems (VEEV -0.37%) has many of the qualities that I look for in long-term, potential home run stocks: solid business momentum, a founding CEO who owns almost one-fifth of Class B shares outstanding, and a widening moat that could make the company relevant for years to come.

That's why -- back in Jan. 2014 -- I bought my first shares of Veeva stock. For those who are unfamiliar, Veeva offers cloud-based solutions to help pharmaceutical companies manage their sales teams and navigate the often-arduous process of collecting data for the drug approval process.

The company is expected to release earnings on Tuesday after the market closes. Here are the three things I'll be watching when that happens, ordered from least to most important for long-term investors like myself.

Wall Street expectations
I don't give too much weight to analyst expectations. These professionals are often focused solely on a time horizon that fails to eclipse even a couple of months. Foolish investors, however, are focused on a decades-long time horizon. In fact, that's one of the key advantages we have over the "pros."

That being said, I also know that I'm human; if the stock makes outsized moves -- up or down -- on Wednesday, I'd like to know why. What the company reports -- relative to short-term expectations -- is usually the best explanation.

Usually, all of these numbers will be included in the company's press release.

CRM's steady improvements
The largest segment of Veeva's revenue comes form helping drug companies manage their sales force. At the end of its 2014 fiscal year, CRM accounted for 84% of all its sales. Historically, this service has focused on keeping track of relationships with key customers and the productivity of a company's workforce.

Recently, Veeva has been trying to make its CRM offerings even more helpful and "sticky." These initiatives include "Approved Email," which I consider to be crucial because of its stickiness, and Event Management. At the end of last quarter, management stated that Approved Email had a 14% attach rate, but failed to provide specific details about Event Management, other than that the company had seen a "strong uptick" in interest.

I will be listening to the company's conference call to see if any further details are revealed on these two fronts. I will also be reading its annual report, which, if read carefully, should reveal how much CRM subscription revenues increased in 2015. For reference's sake, they grew by 49% last year. I would be perfectly happy with 20% to 30% growth moving forward.

It's all about the Vault
While Veeva's CRM suite is impressive, Vault is the reason that investors are willing to pay over 45 times trailing earnings for the stock. Drug companies need to track and file incomprehensible amounts of data when it comes to drug trials. And the process isn't short, either: Some drugs take over a decade to go from idea to marketable product.

CEO Peter Gassner has repeatedly said that the opportunity from Vault is "at least" as big as CRM -- but I think it's many times bigger. I also think that the service has an even more important competitive advantage: high switching costs.

Changing operating systems within a company is no easy task; in fact, it's more like a nightmare. Imagine trying to transition away from Veeva Vault to another competitor, and then add in the headache of transitioning data from drugs currently in the approval process. As long as Vault isn't outrageously priced and continues to function as promised, I can't imagine why any management team would put its workforce through that.

At the end of last quarter, 34 of the top 50 global pharmaceutical companies were using at least one Vault product. Management also stated that non-CRM growth was also well over 100% and that much of this was attributable to Vault. Currently, however, Gassner believes that Vault has only penetrated about 5% of its potential market.

I will be listening in on the conference call to get updates on all three of these metrics: the number of top pharmaceutical companies signed on, the growth from Vault, and market penetration.

Overall, this isn't a stock for the faint of heart -- 16% of shares are sold short, and as I already mentioned, the stock is quite pricey. But for investors who are willing to buy and hold, the long-term potential is still significant.