Please ensure Javascript is enabled for purposes of website accessibility
Log In Help Join The Motley Fool
Free Article Join Over 1 Million Premium Members And Get More In-Depth Stock Guidance and Research
By Matthew DiLallo – Feb 26, 2016 at 9:53AM

The shale leader continues to make the improvements necessary to run at a much lower oil price.

The old saying that "when the going gets tough, the tough get going" definitely applies to EOG Resources (EOG -7.80%). With oil prices continuing to slump, the company rolled up its sleeves during the fourth-quarter and got to work. It made some good progress, especially in pushing its costs lower, so that it's in a better position to run the company for the long-term at much lower oil prices.

Even it is being affected by weak commodity prices
While EOG Resources is improving its operations so that it functions much better at lower oil prices, it's not there yet. That was clear by looking at its fourth-quarter financial results.

Due to weaker oil and gas prices EOG Resources turned in an adjusted net loss of $149.5 million, or $0.27 per share, which was well below the year-ago profit of $431.9 million, or $0.79 per share. While the company was able to significantly reduce operating expenses, with general and administrative costs coming down 17% and lease and well costs falling 30%, it simply hasn't pushed costs down low enough to mute the sting from currently very weak oil and gas prices.

Spending and production continues to come down
Because oil and gas prices are so weak right now, EOG Resources continues to reduce its investments in exploration and development. Those investments, which fell 42% last year, are expected to fall an additional 45% to 50% in 2016.

At its current projected investment rate of $2.4 billion to $2.6 billion in 2016, EOG Resources is guiding that its oil production will decline by roughly 5% over last year. That's actually a pretty remarkable result considering the company needed roughly double the capital to just keep its oil production flat last year. This is a clear sign of how efficient it has become not only with capital, but with improving well productivity.

It's a very conservative plan, even more so than last year when the company invested enough capital to keep production flat. However, with prices even weaker in 2016 EOG Resources and its peers have have abandoned not just growth, but even maintaining the status quo.

It's a pretty remarkable change in direction for companies like Chesapeake Energy (CHKA.Q), which for example burned through billions of dollars in excess of cash flow last year to grow its production by 8%. In 2016, it's slamming on the brakes with Chesapeake Energy cutting spending by 57%, which will cause its production to decline by as much at 5%. That said, Chesapeake Energy really has no choice because it is running low on cash and has a mountain of debt on its balance sheet that still needs to be addressed.

It's putting a premium on premium drilling inventory
Because it doesn't have the same balance sheet concerns that are weighing down most of its peers, EOG Resources has had the time during the downturn to really focus on improving its operations and drilling returns. In particular, the company has delineated its acreage position to such an extent that it has been able to separate a vast inventory of what it's now calling premium drilling locations. These are well locations that thanks to continued efficiencies, technical advances, and geoscience breakthroughs are able to earn solid rates of return at low commodity prices. As the slide below shows, the company has identified 3,200 premium well locations that it can focus its development dollars on during periods of low oil prices: 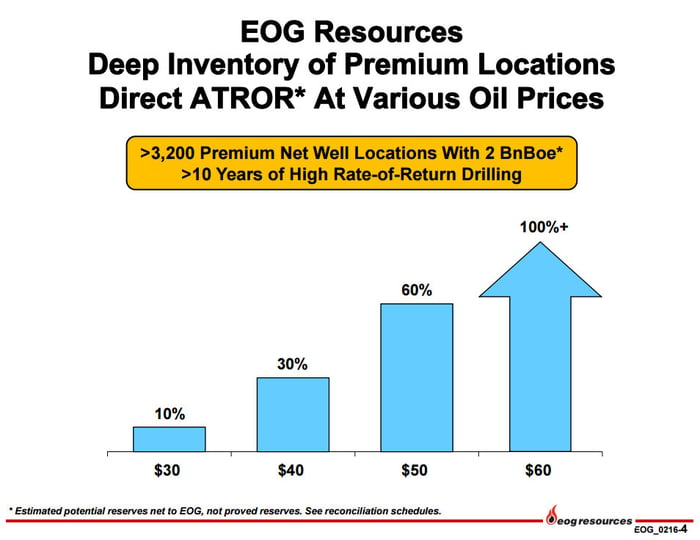 That inventory, which currently encompasses about a quarter of its total drilling inventory, is enough to last the company a decade at its current drilling rate and at a $40 oil price, assuming no further innovations. That inventory really sets the company apart, because it can focus on drilling for returns, even in a low oil price environment.

Investor takeaway
Like the rest of its peers, EOG Resources is feeling the sting from weak oil prices. However, the company has continued to work hard to get its costs down. That's putting itself in a much better position to be able to profitably run the company in a low oil price environment. While it's not fully there yet, it is much closer than most of its rivals.

Matt DiLallo has no position in any stocks mentioned. The Motley Fool owns shares of EOG Resources,. Try any of our Foolish newsletter services free for 30 days. We Fools may not all hold the same opinions, but we all believe that considering a diverse range of insights makes us better investors. The Motley Fool has a disclosure policy.