McDonald's Corporation (MCD 2.46%) is stepping back from the McPick 2 for $2 menu, the platform that was supposed to replace the Dollar Menu. The new value menu was seen by some analysts as a needed component for McDonald's to lure in budget-minded customers. 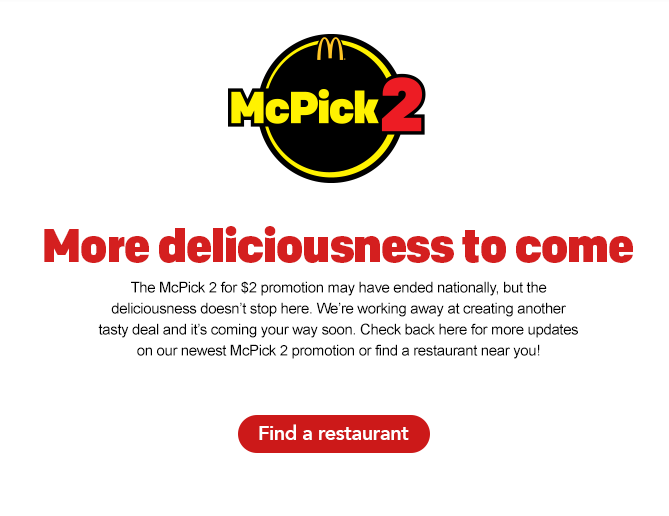 The fast-food chain has not yet made an announcement about the decision, but signage and advertising promoting a 2 for $5 menu have begun to appear in its place, and its website notes that the 2 for $2 promotion has ended. According to Consumerist, billboards and other such announcements have appeared in cities like Kansas City and Des Moines promoting the new 2 for $5 menu, which includes premium sandwiches like the Big Mac, Quarter Pounder, and chicken nuggets, unlike the 2 for $2 menu, which featured items like mozzarella sticks, small fries, and low-priced sandwiches like the McDouble.

Does it matter?
Surprisingly, the decision comes following positive remarks on the 2 for $2 menu in the company's recent earnings call. CEO Steve Easterbrook had said, "the offer appears to be resonating with customers," but the program was also in a test phase, and he said the company would make adjustments as it moves to a "more permanent national platform later this year."

The 2 for $2 menu also appeared to be a response to its fast food rivals like Wendy's (WEN 2.54%) and Burger King, a division of Restaurant Brands International (QSR 2.87%), which have been engaging in a race to the bottom with their own value meals. Wendy's rolled out a 4 for $4 menu last October, which includes a burger, chicken nuggets, fries, and a drink, while Burger King did it one step better with a 5 for $4 menu, offering the same mix but with a chocolate chip cookie to boot.

With its 2 for $5 menu, McDonald's seems to be targeting a similar price point as Wendy's and Burger King, but putting its premium sandwiches front and center instead of budget-priced offers.

Reaction on social media has been mixed with some cheering the move, while others said they would switch to one of the company's rivals.

While McDonald's could lose some value-oriented customers to its rivals, it could also benefit by adding sales and profits with a value meal that sells up rather than down and leads with its best known menu items. Expect some more color on this in McDonald's next earnings report.