J.C. Penney's fourth quarter was a good one, and comparable-store sales look promising. However, the turnaround still has a long road ahead for investors.

What: Shares of J.C. Penney Company (JCPN.Q), one of the nation's largest apparel and home furnishing retailers, are up 12% Friday afternoon, with investors apparently encouraged that the company's turnaround has taken positive steps forward.

So what: Revenue moved 3% higher to $3.99 billion during the fourth quarter, slightly ahead of analyst estimates. Better yet, the company reported a 4.1% increase in comparable-store sales, which was a pleasant departure from the dark days of just a few years ago. The bottom line was a little more complicated, but investors found the results to their liking.

On one hand, J.C. Penney lost $131 million, or $0.43 per share during the fourth quarter, which compares unfavorably to the loss of $35 million, or $0.11 per share, from a year ago. However, investors shrugged that off because much of that widening loss was a result of restructuring and pension costs. When adjusting for those, its adjusted earnings per share checked in at $0.39 per share which was in line with what analysts expected.

Now what: As the company continues to trudge along its turnaround story, which is looking brighter each quarter, it expects comparable-store sales to jump another 3% to 4% during 2016. It also forecasts an increase of 40 to 60 basis points in gross margin and for selling, general, and administrative costs to decline compared to last year. 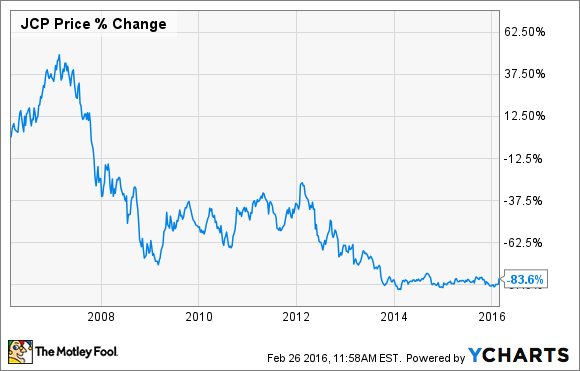 Management also expects its EBITDA to reach $1 billion in 2016, adjusted EPS to be positive, and free cash flow to improve compared to last year. Those are all good business factors for a company nearly left for dead a few years ago, though it still has a long way to go before its stock price recovers from its downward spiral over the years.