Without any direct news for TrueCar, the stock is bouncing higher late Friday, but it's only regaining some of what it lost after a brutal fourth-quarter report.

What: Hip, hip, hooray! Shares of TrueCar (TRUE 1.86%) are up more than 10% Friday despite recently posting a very sobering fourth quarter,following a brutal 12 months for the young company.

So what: Unfortunately, for investors hoping for some real and direct positive news for the stock, there really isn't any such news Friday. That said, investors might be slightly optimistic about multiple companies and analysts, including TrueCar, projecting February new car sales to reach 1.3 million units. That would represent a roughly 6.5% gain compared to last year's February, and it would be the best February in terms of volume since 2001. That level of sales would equate to a seasonally adjusted annualized rate, or SAAR, of about 17.5 million units -- much higher than the 16.4 million recorded last February.

"Demand for new cars and trucks this month looks strong enough to lift new sales in February to the highest level in over 15 years," said Eric Lyman, TrueCar's vice president of industry insights, in a press release. "It's a sign that consumers remain generally confident in the economy and their finances – and are even willing to brave winter weather to buy a new vehicle."

As they say, a rising tide lifts all boats, and the more new vehicles the U.S. market sells, the better for TrueCar's business potential.

Now what: However, let's not kid ourselves. The road to recovery for this beaten-down company will extend beyond this 10% gain and beyond 2016. 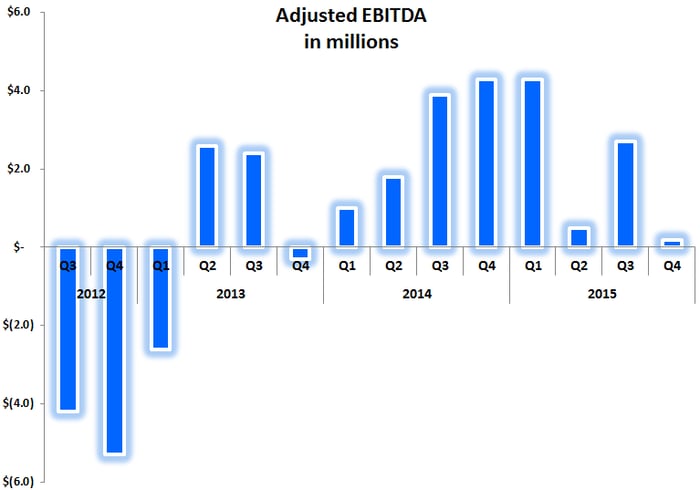 As you can see, newly appointed CEO Chip Perry and his team have their work cut out for them in fixing the issue between TrueCar's expanding top line and disappearing bottom line. Don't expect immediate answers, as management guided for full-year revenue to check in between $270 million and $275 million, a slight increase from just under $260 million last year. Even more disappointing, its adjusted EBITDA is expected to merely break even for the full year.

On the bright side, it's still early in the game for this company, if it can figure out how to reinvigorate its bottom-line results beyond 2016.

Daniel Miller owns shares of TrueCar. The Motley Fool recommends TrueCar. Try any of our Foolish newsletter services free for 30 days. We Fools may not all hold the same opinions, but we all believe that considering a diverse range of insights makes us better investors. The Motley Fool has a disclosure policy.