There are many question marks surrounding the card company's ability to grow profits by slashing expenses.

When a company announces its intention to restructure, layoffs and cost-cutting efforts typically follow. Of course, there's no such thing as a "typical" restructuring, as each one varies in size and intensity. When American Express (AXP -0.75%) announced its restructuring plan, details were scant, so investors can only make so much of it.

These initiatives certainly mean much more to people within American Express than to those on the outside.

We do know at least one specific plan. Prior to American Express' fourth-quarter earnings release, Bloomberg reported that the company is slashing staff in its enterprise growth unit, a group tasked with growing American Express' brand among less creditworthy clientele. Several top executives have left, and the unit will cut about 170 jobs, according to the article.

However, the Bloomberg article mentions that American Express will continue to push into prepaid cards, pointing out that the division has been part of Amex since 2010, when the Serve product was created from the $300 million acquisition of a company then known as Revolution Money. 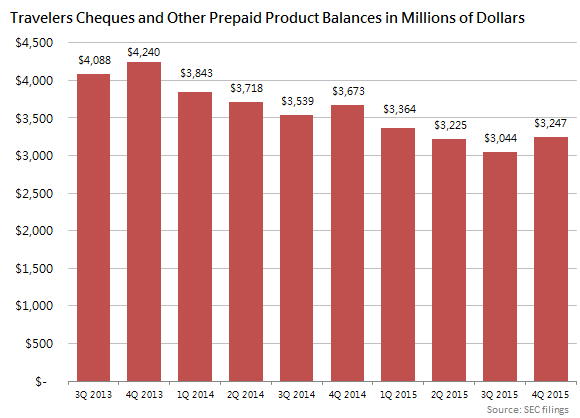 That the prepaid unit will live on may stand as some indication that Amex isn't cutting too deep just yet. American Express combines the balance sheet liabilities created by its prepaid cards with its Travelers Cheques. Although this line item grew quarter over quarter in its most recent report, year-over-year growth hasn't occurred. Growth, it appears, is only seasonal.

On page 110 of its 10-K, American Express leaves little to the imagination about its foray into prepaid products: The company noted that it took a $384 million impairment charge, which included a $219 million writedown to the "entire balance of goodwill in the Prepaid Services business." Prepaid is worth just as much dead as it is alive, apparently.

Saving $1 billion by 2017
Amex is hoping to cut $1 billion from its cost base by the end of 2017. That's about 4.4% of its non-interest expenses in 2015. How it gets there remains a bit fuzzy. As one analyst was quick to point out on its conference call, winding down its relationship with Costco (COST -1.20%) would naturally result in lower expenses, obviously offset by lower revenue.

Two executives replied, but neither gave a firm answer as to how the cost savings would be divvied up. As 18% of Amex's loan book comes from Costco, there are inevitably plenty of operating expenses that are tied to its relationship with the retailer. But winding down expenses at the cost of revenue is not exactly ideal.

American Express will address its shareholders at its investor day on March 10. By then, shareholders should hope for better disclosure of its specific plans to eliminate expenses. "Restructuring" without context is just a buzzword.

Jordan Wathen has no position in any stocks mentioned. The Motley Fool owns shares of and recommends Costco Wholesale. The Motley Fool recommends American Express. Try any of our Foolish newsletter services free for 30 days. We Fools may not all hold the same opinions, but we all believe that considering a diverse range of insights makes us better investors. The Motley Fool has a disclosure policy.