Please ensure Javascript is enabled for purposes of website accessibility
Log In Help Join The Motley Fool
Free Article Join Over 1 Million Premium Members And Get More In-Depth Stock Guidance and Research
By Daniel Miller - Feb 27, 2016 at 8:10AM

Here are three key takeaways from TrueCar's latest report, and perhaps a silver lining for investors.

Remember two quarters ago? The quarter that officially sent TrueCar's (TRUE 1.16%) stock price into a steep downward spiral? It was a quarter so brutal it required a pre-conference-call conference call to prepare investors for the huge shortcoming that it was about to report. Adjusted EBITDA plummeted, executives bailed left and right, and co-founder and CEO Scott Painter decided it was time to step down.

For investors like me, the second quarter was not fun. Sadly, after a third quarter in which TrueCar appeared to have gotten back on the correct road, its fourth quarter had much more in common with its second. Let's take a look at some key takeaways, including some of the positive figures from the disappointing results.

Top line grows yet slows
At first glance, TrueCar's fourth-quarter and full-year revenues look fairly healthy. Revenue was up 15% year over year for the quarter, while full-year revenue was up 26%. It's true that the company's fourth quarters are seasonally slow -- you can see the historical pattern of dips on the chart below -- but 2015 brought a much steeper slowdown than in prior years. 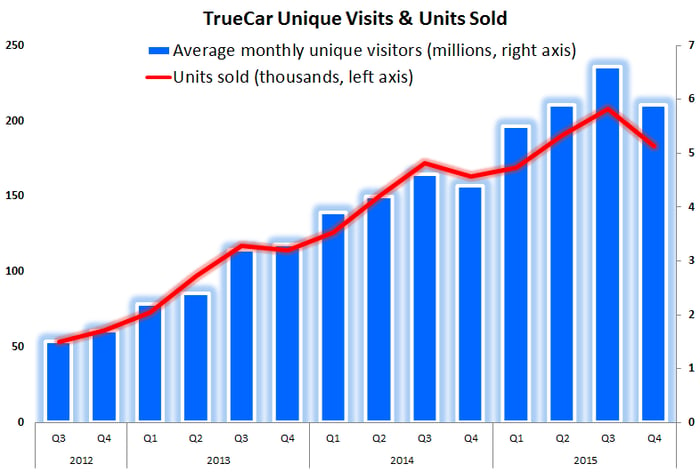 Another way to look at the slowdown is in terms of revenue percentage gains. While TrueCar's revenue was up 15% in the fourth quarter, that was much slower growth than the third quarter's 28% year-over-year growth. And the company's fourth-quarter revenue growth rate was roughly half of what was achieved in the second and first quarters -- growth of 29% and 33%, respectively.

Unfortunately, TrueCar's slowing top-line growth was the least of the company's problems.

Adjusted-EBITDA woes
TrueCar's adjusted EBITDA has been the most telling statistic for investors, showing the highs and lows since the company went public. The unfortunate truth is that being a middleman can be a difficult business. TrueCar's consumers want instant information and guaranteed prices for free, and its dealerships are willing to pay for sales leads but are constantly looking for ways to pay less, or to put money toward other marketing tactics.

While the plunge in adjusted EBITDA is concerning, it's worth noting that the fourth-quarter figure is likely worse than it would have been under different circumstances. As you can see below, a big chunk of the net loss is attributed to stock-based compensation, which reflects the departure of many high-level executives.

Silver lining?
There's no denying it was a brutal fourth quarter and sobering year for TrueCar investors. If there's a silver lining here, it's that the company is still increasing the profitability of each sale. For the year, TrueCar's acquisition cost per sale was $197, which was an 11% improvement. On the flip side, TrueCar's monetization per transaction was $324 during the third and fourth quarters, significant improvements over the prior year's $303 and $314 for the same time periods.

Another small silver lining is that TrueCar's transaction revenue per franchise dealer was at the second-highest level since the company went public. That's positive for investors because the more value TrueCar offers dealerships, the more those dealerships will value TrueCar's business. That should result in better relationships with dealers, an area that has been rocky throughout the company's history.

Unfortunately, one of the last things to jump out from TrueCar's fourth-quarter presentation is that 2016 will be another rough year, as the company tries to get its business back on the correct path. The company's guidance for the full year is for revenue between $270 million and $275 million, which would roughly be a meager 4% increase from 2015. Furthermore, TrueCar's full-year guidance for adjusted EBITDA is $0, and there's no need to explain why that's disappointing.

It's still early in the game for this young company, and I'm not selling my shares, but I'm also not in line to double my position, even at these prices.