The dividend looks safe as long as shareholders are willing to trade the high yield for increased debt.

After repeated promises of safety, dividends are being cut all across the energy sector. Anadarko Petroleum, Chesapeake Energy, ConocoPhillips, Encana Corporation, Marathon Oil, and Noble Energy have all cut their dividends in the past 12 months.

Still, Barclays estimates that dividends will continue to consume roughly 26% of 2016's estimated cash flows for the large-cap energy producers it covers. In a recent research note, it stated that "most of the companies with a dividend yield of more than 1.5% should consider cutting the dividend."

Cash flows support the dividend ... for now
This week, Occidental reaffirmed its $0.75 quarterly dividend. While it still has one of the stronger balance sheets in the industry, the company could face significant financial headwinds in the quarters to come if oil prices don't rebound.

For example, the company frequently points to its $4.4 billion cash hoard, as well as an industry leading long-term debt-to-capital ratio of just 22%. There's no doubt that the company is better positioned than its peers (hence the affirmation of its S&P rating at single-A with a stable outlook), but if you break down 2015's cash burn, things may not stay rosy for long. Cash flow from operations was only $4.8 billion last year, despite average realized prices of greater than $40 a barrel. Capital expenditures alone wiped out any possibility of generating positive free cash flow.

Including its $2.3 billion dividend obligation, cash levels fell a massive $3.4 billion last year, even after taking on an additional $1.5 billion in debt. Management estimates that for every $1 change in oil, operating cash flow swings by about $100 million. If prices remain at $30 a barrel, the company could lose an additional $1 billion in cash flow generation this year. 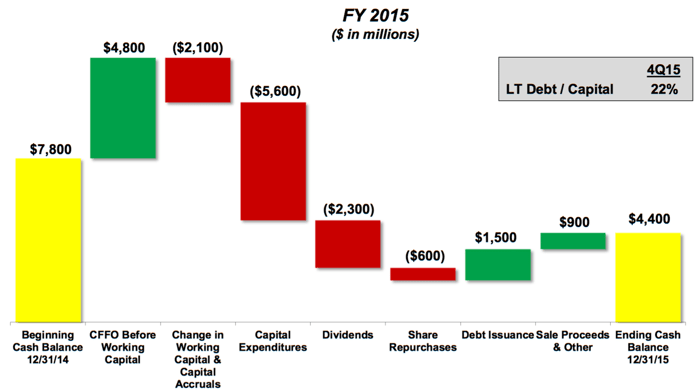 To preserve cash, most oil and gas companies have turned to gutting its capital expenditure budget. Occidental's plans for 2016 call for reducing its oil and gas capital budget by roughly $2.2 billion. This plan provides some breathing room, but two major concerns remain.

First, based on prevailing oil prices and the current dividend, the company would still probably end the year with negative free cash flow. Second, reducing the capital budget to $2.0 billion is about as far as the company can go before cutting into existing projects. If low oil prices persist until next year, Occidental will probably have already used up the easiest way to free up large chunks of cash flow. 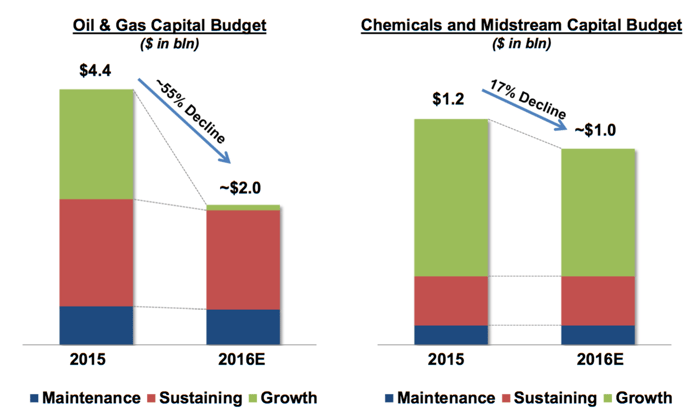 Growing debt will increase the riskiness of its dividend
Breaking it down, unless oil prices improve rapidly, it's pretty difficult to argue that Occidental won't feel significant pressure on its liquidity this year. To plug the gap, as it did in 2015, the company will probably turn to the debt markets. With debt equal to only 34% of its equity, there's still plenty of room to take on more leverage without endangering the business (BP, for example, is at 54%).

As the company adds to its debt, however, its 4.2% dividend, costing $2.3 billion a year, becomes increasingly untenable. If you believe that oil prices will rebound over the next 12 to 18 months, Occidental's under-leveraged balance sheet should give it plenty of room to maintain its payout, even if that means taking on more debt. Beyond that time frame, however, the company may have no choice but to lower the payment.