Oil sands production sold for less than $10 a barrel last month. Faced with high costs, these projects may not survive if oil prices remain low.

Most analysts were blindsided by the recent bear market in oil, which has seen prices fall from over $100 a barrel to under $30 in just 18 months. Now that expectations have been reset, more than one Wall Street firm now believes that oil could fall to $20 a barrel or below.

With inventories near all-time highs, the ability to store oil is reaching maximum capacity. Prices may need to continue dropping to slow crude production that can no longer be stockpiled. "Once you breach storage capacity, prices have to spike below cash costs because you have to shut in production almost immediately," said Jeff Currie, Goldman Sachs' head of commodities research. Currie "wouldn't be surprised if this market goes into the teens." Morgan Stanley also sees lower oil prices, but for another reason. "Given the continued U.S. dollar appreciation, $20-$25 oil price scenarios are possible simply due to currency," its analysts wrote in a recent report.

While analysts will no doubt continue debating the direction of prices, sub-$20 oil is already a reality for many producers

$8 oil already exists
Bitumen from oil sands projects hit a low of $8 a barrel last month, down from as much as $80 less than two years ago. It's cheaper than most other types of crude because it has to be blended with higher-cost grades of oil and then transported to refineries in the United States. Oil sands crude can be converted to synthetic crude, a light oil that trades in parity with conventional oil, but only after undergoing an expensive upgrading process.

Syncrude Ltd. is the world's biggest oil sands project, and because of its size, it has some fairly big partners, including Canadian Oil Sands Ltd. (NASDAQOTH: COSWF), Suncor Energy (NYSE: SU), and ExxonMobil-backed Imperial Oil Limited (NYSEMKT: IMO). Despite the latest advance in oil prices, a recent company presentation showed the project is losing at least $10 on every barrel it produces. 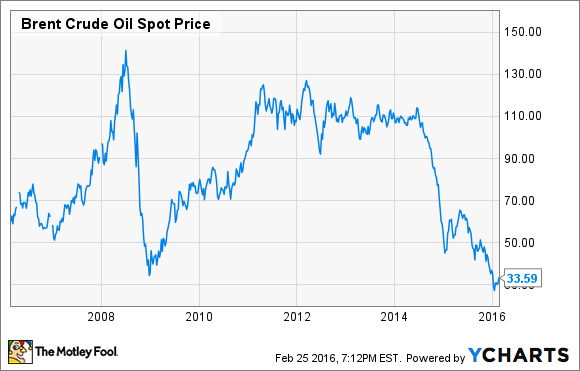 Were these projects doomed to begin with?

Oil sands are plagued with more than just depressed selling prices. A popular way to determine the viability of an oil project is to calculate its energy return on investment (EROI). This metric looks at how many barrels of oil will be produced for every barrel invested.

The EROI for most global oil production averages around 17-to-1, so 17 barrels of oil for every one barrel invested. Even when prices were above $100 a barrel, however, the EROI for an oil sands project was projected to be just 3-to-1, at best 5-to-1. This caused many fund managers to be concerned over the long-term viability of these projects. "I don't think that if you put billions of dollars into a new tar sands project that you will see a decent return on it," said Jeremey Grantham, co-founder of $120 billion asset manager GMO LLC. With realized prices under $10 a barrel, it looks like this forecast is proving correct.

Oil sands operators don't have this advantage, as returns are typically fairly uniform throughout the life of project. In fact, returns may continue to decline. "Those EROI numbers are going to go down as we move away from the highest quality to the lesser quality parts of the resource," said David Hughes, a fellow at the Post Carbon Institute.

Quite simply, oil sands are just not built for a low-price environment. Even if oil prices rebounded, these projects would still face severely discounted selling prices and onerous start-up costs. Recently, Suncor got shareholder approval to buy Canadian Oil Sands, making the combined entity the largest member of the Syncrude project. While Suncor's revenues remain fairly diversified, betting an increasing amount of capital on oil sands projects may not be the best long-term decision.