Alliance Resource Partners has a massive yield that comes with big risks. Here are two high-yield, out of favor, options that look less risky.

Alliance Resource Partners LP (ARLP -3.92%) has a 24% yield backed by a decade of annual distribution increases. But it works in the moribund coal industry and just decided to hold steady on the distribution growth front. There's a lot of risk in that high yield. Here are two other options to consider today.

Coal hurts -- try oil
For a long time, Alliance was able to buck the coal downturn because it operates predominantly in the Illinois Basin coal region, which has been gaining market share from other regions. That allowed the miner to up production enough to offset coal price declines. That dynamic stopped in 2015, and it looks like production and profits will fall this year. While Alliance still expects to cover its 2016 distribution by at least 1.1 times, there's a lot more risk in that payout today than there was a year ago. And the coal market doesn't show any signs of strengthening. So you might want to look at some other options.

One that's worth a deep dive is Enterprise Products Partners (EPD). Like Alliance, Enterprise is a limited partnership, only it operates in the midstream space. That means it's tied, in some ways, to the fortunes of the oil and natural gas industry -- another out-of-favor sector. Which helps explain why Enterprise's yield is around 7.5%. That's not nearly as exciting as 24%, but Enterprise's distribution is backed by long-term, fee-based contracts. It has a little exposure to oil and gas prices, but the vast majority of its business is not reliant on a volatile commodity, just the demand for moving it from where its drilled to where it's used.

More notable, despite the oil industry malaise, Enterprise's distributable cash flow, the cash it can pay out to unit holders, actually increased around 30% year-over-year in 2015. With some 50,000 miles of pipes and strategically located storage facilities, Enterprise plays a key role in the movement of oil and gas, which, despite the price drops continues to be important. (Last I checked, most cars still run on gas.) And, unlike Alliance and many other LPs, Enterprise doesn't have an external general partner eating up cash flow, so all its cash goes to shareholders.

Enterprise covered its distribution in 2015 by 1.3 times, and CEO Jim Teague is expecting a 5% distribution boost in 2016. On that score, Enterprise has nearly two decades of annual increases under its belt. Of course, there's no risk-free investment, but Enterprise is certainly a lot lower on the risk spectrum than Alliance and a 7.5% yield is pretty hard to argue with.

A little more risk?
If you're willing to take on a little more risk for a higher yield, you might want to consider AmeriGas Partners (APU). This limited partnership is focused on selling propane. Propane is a fuel that's used in gas grills, drying crops, and home heating, among other things. In general, propane use is in decline. But AmeriGas doesn't make propane; it distributes it (and simply passes the cost of the fuel along to customers, for the most part). The thing is, propane distribution is still a fragmented industry, allowing AmeriGas to expand via acquisition. For example, it acquired three companies in its fiscal first quarter.

The image of a dying industry, however, has long left propane distributors with high yields. AmeriGas, for example, has a yield of nearly 10%. It's increased its annual distribution for 11 years and covered its payout by 1.1 times in 2015. That sounds like skimpy coverage, but unlike many partnerships, AmeriGas' capital needs are modest, and it self-funds most of its growth. So there's more leeway in the business model for adversity. It does, however, have a general partner, which increases ongoing costs.

That said, the company's long-term target is to increase distributions in the low single digits while maintaining solid coverage ratios. It hasn't changed that goal and, in fact, has been trying hard to explain to investors why low commodity prices are actually good for its business (lower prices reduces customer switching to alternatives) -- which suggests that Mr. Market isn't taking the time to understand AmeriGas. If you are looking for a high yield, perhaps you should take the time. 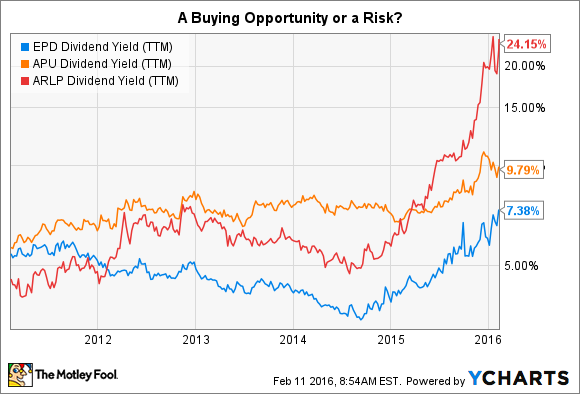 As an alternative, you might consider a solid midstream partnership like Enterprise that's still executing well and shielded to a large degree from the problems in the oil industry -- even though falling oil has taken the units down a notch. In other words, a potential opportunity. The same is true of misunderstood AmeriGas, which has even less exposure to commodity prices than Enterprise. With yields of 7.5% and nearly 10%, respectively, these appear to be two out-of-favor options with less dividend risk than Alliance.

Reuben Brewer has no position in any stocks mentioned. The Motley Fool recommends Alliance Resource Partners and Enterprise Products Partners. We Fools may not all hold the same opinions, but we all believe that considering a diverse range of insights makes us better investors. The Motley Fool has a disclosure policy.